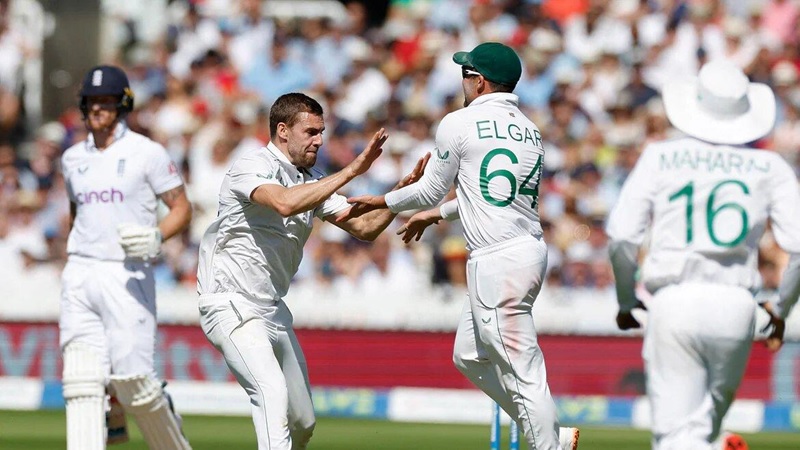 Brendon McCullum’s England surprised everyone by bringing a new strategy ‘Bazball’ in Test cricket. Although he taunted New Zealand and India in four consecutive Tests, the Bazball did not work against South Africa. The English lost the first match of the three-match test series against the Proteas by an innings and 12 runs.

England lost all wickets on the third day of the first Test at Lord’s on Friday (August 19) as England’s second innings collapsed to just 149 runs. Earlier, their collection in the first innings was 165 runs. On the other hand, the Proteas collected 326 runs after losing all their wickets when they came down to bat for their first innings.

McCullum’s disciples gave the proof in the last four Tests against New Zealand and India. The opponent’s bowlers were kept under pressure by hitting boundaries one after another by batting in an ODI mood. But this time, Ben Stokes and others were quite the opposite of that.

They could not survive the second innings after the first innings in front of the Protea bowlers. Zak Crawley was the victim of Keshav Maharaj’s lbw after scoring 20 runs in the opening pair. He scored 13 runs against 22 balls. Ollie Pope, who scored 5 runs off 15 balls, was also caught lbw by Keshav.

Then the Protea Pacers came on the attack. Joe Root (6) was the victim of Lungi Ngidi. Jonny Bairstow (18) and Alex Lees (35) were victims of Anrich Nortje. Captain Ben Stokes was standing at one end, watching his teammates come and go. Wicket-keeper batsman of the English camp, Ben Foakes, was the victim of Nortje and returned to the dressing room for no runs.

After losing 6 wickets for 86 runs, the fear of an innings defeat arose in the English camp. Stokes went for a last effort with Stuart Broad. 55 runs came in the pair of these two. After playing a wrong shot and scoring 35 runs off 29 balls, Broad returned to the dressing room after giving a catch in Rabada’s ball.

After coming to the crease, Matty Potts could not accompany the captain, and Stokes also could not save the team from shame. After scoring 20 runs off 28 balls, Rabada bowed his head and had to return to the dressing room. England’s innings introduced Test cricket anew, stopping at 149 runs. They lost the match by an innings and 12 runs.

Earlier, Kagiso Rabada had single-handedly demolished McCullum’s men in the first innings, and his victims were 5 in that innings. Marco Jansen took 2 wickets and Anrich Nortje took 3 wickets to stop the English innings at home for just 165 runs.

On the other hand, South Africa made 326 runs in the first innings based on Dean Elgar’s 47, Sarel Erwee 73, Marco Jansen’s 48, and Keshav Maharaj’s 41 runs. Broad and Stokes took 3 wickets each for the English, James Anderson and Jack Leach picked up one wicket each and Potts took 2 wickets. Broad also touched on the milestone of taking a hundred wickets at Lord’s.

Protea pacer Kagiso Rabada was adjudged player of the match after picking up 7 wickets, including 5 in the first innings and 2 in the second innings. On August 25, these two teams will meet in the 2nd match of the series at Old Trafford in Manchester.

Player of the match – Kagiso Rabada