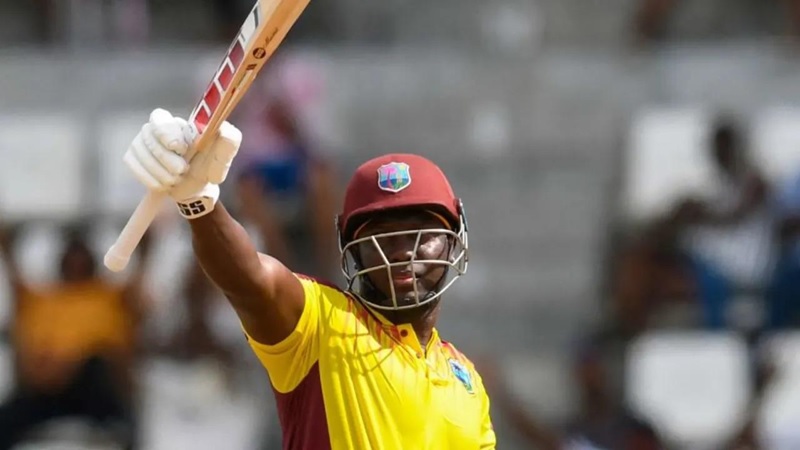 After the first match getting washed away due to the rain, the host West Indies have picked up a remarkable 35-run victory over visiting Bangladesh in the second match of the series on Sunday, courtesy of stormy innings by Rovman Powell at Windsor Park in Dominica. The Caribbeans won the match and got a 1-0 lead in the 3-match T20I series.

After winning the toss, Caribbean captain Nicholas Pooran decided to bat and first sent Bangladesh to the field. West Indies got off to a flying start as they came into bat. They picked up 14 runs in the first over of pacer Taskin Ahmed, and Kyle Mayers hit a four and a six on that over.

The left-arm batsman also got aggressive in the second over. He struck a four off the first ball. But then Mahedi turned around nicely. He did not concede any run in the successive three balls. In the fifth ball, an outstanding off-spin ball bowled the terrible Mayers. Mayers, who scored 17 off 9 balls, lost the middle stump while playing a slog sweep relying on his knees.

After one over, all-rounder Shakib Al Hasan sent Shamarh Brooks (0) back to the dressing room. The hosts lost 2 wickets to score 26 runs then. From there, the pair of Brandon King and Nicholas Pooran turned the West Indies around. Courtesy of them, they scored 45 runs for 2 wickets in 6 overs of the power play. In the third wicket, the duo laid the groundwork for the Caribbeans.

Finally, With the ball in his hands, Mosaddek Hossain broke the 74-run stand in the 13th over from 55 balls. While trying to play a reverse sweep off Mosaddek’s spin, the ball struck Pooran’s pad. The umpire raised his finger at the appeal, but the Caribbean captain took the review. However, it did not work for him. As a result, he had to return to the dressing room with 34 runs off 30 balls.

King picked up the fifty off 36 balls. Then Rovman Powell raised a storm with his bat. In the 16th over, the hard-hitting batsman picked up 23 runs off 5 balls with 3 sixes and a four to Shakib. Powell also took on Taskin with two sixes and a boundary in the next over. 21 runs came in that over. The Caribbeans went ahead with 44 runs in two consecutive overs.

In the first ball of the 18th over, Shoriful Islam got the wicket of the half-century scorer Brandon King (57 off 43 balls) as Shakib took a catch in the boundary. Powell completed the fifty playing only 20 balls in the next ball, and Shoriful gave only 3 runs in that over.

However, Powell’s violence continued till the last ball of the innings. Mustafiz gave 10 runs in the 19th over, and Powell also hit two sixes to Shoriful in the 20th over. In the end, the West Indies got an extensive collection of 193 runs for 5 wickets courtesy of his unbeaten innings of 61 runs from 28 balls with 2 fours and 6 sixes.

Shoriful Islam took the maximum number of 2 wickets for Bangladesh. Besides, Mosaddek Hossain, Mahedi Hasan, and Shakib Al Hasan took one wicket each.

Bangladesh batters could not make a good start after coming down to chase the big target of 194 runs. Liton Das, who replaced Munim Shahriar in the opening, could not break the failure chain in this match either. He returned to the dressing room with 5 runs off 4 balls. Anamul Haque was also bowled on the next ball (3 off 4 balls). Bangladesh lost 2 wickets for 8 runs. From there, there was a glimmer of hope in Mahmudullah’s bat.

The Tiger captain hit one four and one six in two consecutive balls by Odean Smith. But he had to stop. Mahmudullah (11 off 7 balls) was caught mid-off while playing down the wicket. Shakib and Afif Hossain then took the helm of the team. The Tigers scored 44 for 3 in 6 overs of the power play.

Afif was playing with a lot of confidence. Romario Shepherd finally picked up his wicket in the 11th over. Afif scored 34 runs off 27 balls, hitting 3 fours and 1 six and was caught in the wicketkeeper’s gloves. The pair made 55 runs off 44 balls.

After that, Bangladesh started to drop out of the match. Neither Shakib nor Nurul Hasan could meet the demand for runs. In their slow pair, 19 runs came from 25 balls, and Nurul made 7 off 13 balls and returned to the dressing room after falling victim to Akeal Hosein.

Shakib survived for a long time, but Bangladesh could not return to the match. In the end, Shakib raised a storm with the bat. He also touched the milestone of two thousand runs in his T20I career by playing brilliant innings in this match. The world’s best all-rounder was unbeaten on 68, playing 52 balls, and he smashed 5 fours and 3 sixes. In the end, Bangladesh lost 6 wickets in 20 overs, and their innings stopped at 158 runs.

For the West Indies, Romario Shepherd and Obed McCoy took the highest number of two wickets each for the Caribbeans. Besides, Akeal Hosein and Odean Smith took one wicket each. The two teams will meet on July 7 at the Providence Stadium in Guyana for the 3rd and final match of the series.

Player of the match – Rovman Powell 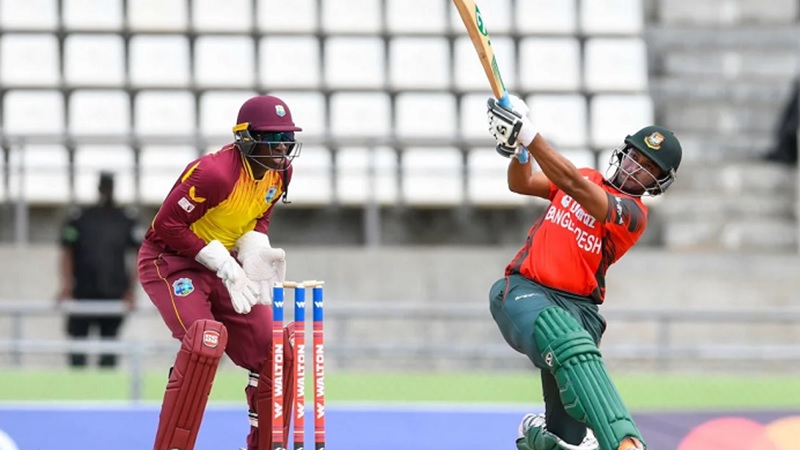