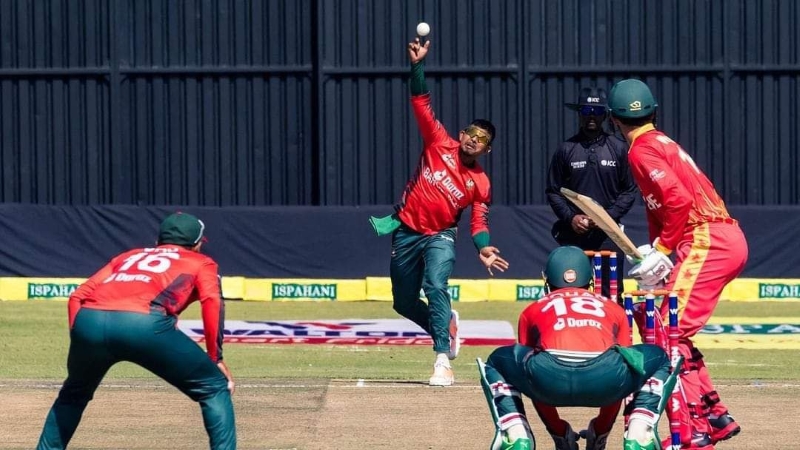 Many may have been surprised by the decision of Nurul Hasan. He gave the ball to Mosaddek Hossain Saikat to open the bowling against Zimbabwe in the second Twenty20! Why did Nurul Hasan give the ball to an all-rounder to open the innings with four expert bowlers? That too whose real job is batting.

If Nurul Hasan’s decision has surprised anyone, everyone may be even more surprised by what Mosaddek has done! In the beginning, he made Zimbabwe’s innings upset with 5 consecutive wickets.

Mosaddek returned Regis Chakava with the first ball proving Nurul Hasan’s decision correct. He took another wicket in the first over, with Wesley Madhevere caught off Liton Das on the sixth ball. Mosaddek took one wicket each in the next three overs. In his second over, he picked up Zimbabwe captain Craig Irvine. Then claimed the wicket of Shaun Williams and Milton Shumba.

Ilyas Sunny has the best bowling figure among Bangladeshi bowlers in T20. The left-arm spinner took 5 for 13 in 2012, against Ireland in Belfast. Shakib Al Hasan has the second-best bowling figure jointly with Mosaddek. He took 5 wickets with 20 runs against West Indies in Mirpur in 2018.

Apart from these three, only one bowler of Bangladesh has got 5 wickets in international T20, he is Mustafizur Rahman. The left-arm pacer took 5 wickets for 22 runs against New Zealand in the 2016 T20 World Cup in Kolkata.

Mosaddek’s T20 debut was against Zimbabwe. In January 2016 in Khulna, he bowled 2 overs and did not get any wickets for 10 runs. He had only 7 wickets in the previous 19 matches. But this time he has overcome all the imperfections.