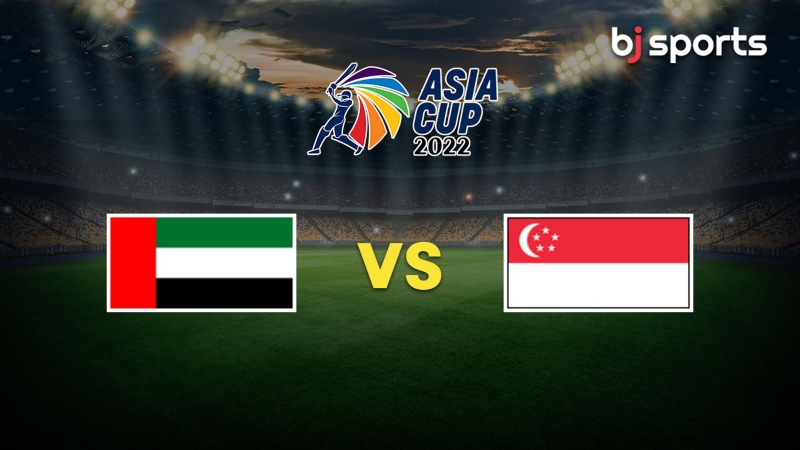 In the third match of the Round-Robin portion of the 2022 Asia Cup Qualifier, UAE will face Singapore. On Monday, August 22, the game will begin at 18:00 local time at the Oman Cricket Academy Ground, Turf 1. Muscat.

UAE lost to Kuwait on Sunday night by one wicket, which was a dismal start to Match 2. Despite being the clear favorites going into the game, they failed to win. With 88 runs from 61 balls, opener Chirag Suri led the team despite possibly favoring a more aggressive strategy for this game. Together with opening partner Muhammed Waseem, the duo added 78 runs in just nine overs, making it appear as though they would win easily. Basil Hameed, an off-spinner, took 3-22 from four overs while bowling, but the remainder of the bowling assault was far too pricey. UAE’s batting and bowling need to get better for this game.

Match 1 saw Singapore lose to Hong Kong by eight runs, a losing margin far closer than most expert observers had anticipated. We predict Singapore to be much more competitive versus UAE than would have been anticipated only a few days ago as a result of that performance giving them confidence. In their match against Hong Kong, Amjad Mahboob, Janak Prakash, and Akshay Puri each claimed two wickets, with the majority of their runs coming from openers Aritra Dutta (29) and Janak Prakash (31).

On August 22, Al Amerat should have clear skies. Although the wicket can be on the slower side, favorable batting conditions are anticipated.

The side chasing always has the upper hand at this location. Setting up totals has historically been difficult due to the wicket’s tendency to be on the slower side. The team that wins the toss is likely to choose to bowl first.

The Oman Cricket Academy Ground, Turf 1, in Muscat will host the game. The first two games of the qualification have seen the most success for spin bowlers, and we anticipate further success for them.

The squad expects Muhammad Waseem and Chirag Suri to start out similarly to how they performed at the top. As they missed their line and lengths in the previous game, Rohan Mustafa and Kashif Daud must bowl better lines with the new ball.

In this encounter, the starting pair of Rohan Rangarajan and Aritra Dutta will try to give their team a strong start. In the previous game, Amjad Mahboob handled the ball brilliantly. The team hopes he and Aryaman Sunil can do the same in this one.

United Arab Emirates is the favorite to win this match.

With the bat, Singapore adopted a “nothing to lose” attitude against Hong Kong, and we anticipate seeing something similar in this match. After a shocking loss to Kuwait, UAE must win this game, and we believe they will be too powerful for Singapore. UAE is our pick to win the match.