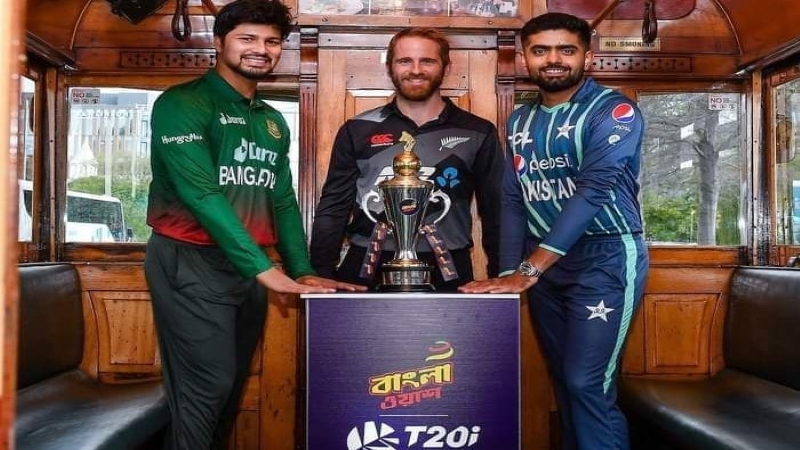 The T20 World Cup is knocking on the door. Participating teams are making last-minute preparations for the tournament, which will begin on October 16 in Australia. As part of this, Bangladesh and Pakistan will participate in the Tri-nation series on New Zealand soil. The trophy of that series has already been unveiled.

The three teams’ captains unveiled this series’s trophy which will start from October 7. New Zealand captain Williamson, Pakistan captain Babar Azam took part in the photo shoot with the trophy. However, vice-captain Nurul Hasan Sohan went to the photo shoot in the absence of Bangladesh captain Shakib Al Hasan.

Meanwhile, Bangladeshi detergent company ‘Bangla Wash’ is the title sponsor of this tri-nation T20 series. That is why the series is named ‘Bangla Wash T20 Tri Series’. As a result, whichever team Bangladesh, New Zealand or Pakistan wins the series, they will return home with a trophy written in Bengali.

Bangladesh and Pakistan will meet in the opening match of the tri-nation series on October 7. Then the Tigers will fight against the host New Zealand on October 9. The remaining two matches are on 12 and 13 October. Meanwhile, Tigers’ batting coach Jamie Siddons thinks that the Tigers will be well prepared for the World Cup if they can challenge the opponents in this series.