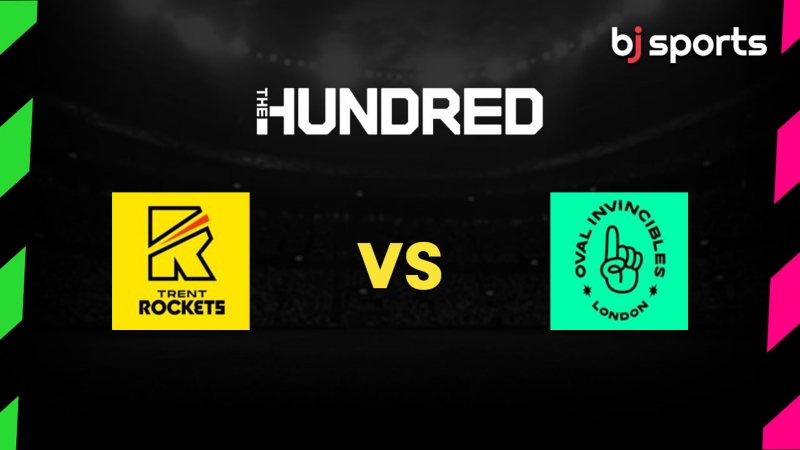 Trent Rockets will take on Oval Invincibles in game 17 of the 2022 Men’s Hundred on Wednesday at Trent Bridge in Nottingham. Both teams have played four games so far, winning three and losing one. Due to a lower net run rate, Trent Rockets are in fourth place while Oval Invincibles are in second.  At 19:00 local time, the game begins.

Although Trent Rockets had their moments against Birmingham Phoenix on Monday night, they ultimately did not score enough runs. They are particularly challenging to play against when they do post a high total.

On August 17, the weather in Nottingham would be cloudy, and the likelihood of a low-scoring game is high.

A team has only ever won a game in this format by batting first at this location. Here, low-scoring contests with an advantage for the side pursuing the score are the norm. The team that wins the toss should not hesitate to bowl first.

The slowing of the pitch would present a challenge for the batsmen. The team batting first would be content with 150 runs, which is a respectable total.

The sole adjustment made by Trent Rockets from their victory over Manchester Originals to their matchup with Birmingham Phoenix at Edgbaston was the substitution of Sam Cook for Luke Fletcher. Due to the Test Match at Lord’s, Joe Root missed the previous two games and won’t be available for this one either.

Before Sunday’s match against the Southern Brave at the Kia Oval, captain and wicketkeeper Sam Billings, Will Jacks, and Mohammed Hasnain were all reinserted into the lineup. We believe that the Invincibles will remain the same for this encounter despite the withdrawals of Jack Haynes, Matthew Milnes, and Hilton Cartwright.

Trent Rockets are the favorites to win this match.

Due to the personnel on display, this game will grab the interest of both Men’s Hundred and general cricket enthusiasts. Both teams have enjoyed successful seasons thus far and are just a few points apart from the top of the standings. Trent Rockets are our pick to prevail in a close game.