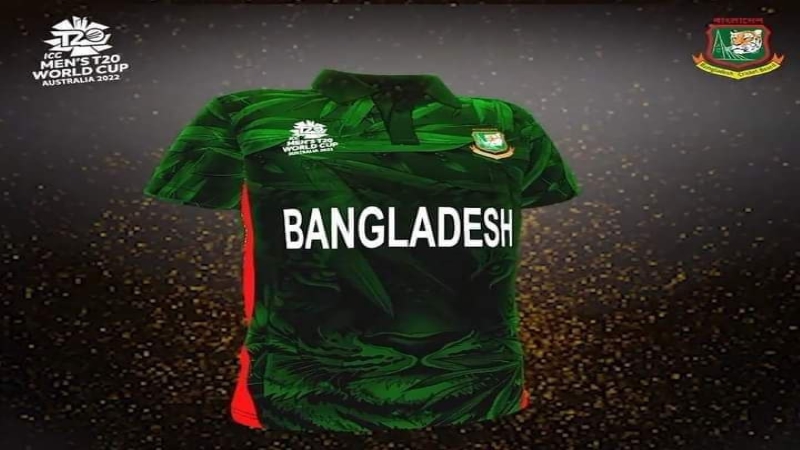 The 8th edition of the T20 World Cup is going to start on October 16 in Australia. Already, the participating countries have completed the work of announcing the team and unveiling the jersey one by one. Following this, the Bangladesh Cricket Board (BCB) unveiled the jersey for the upcoming World Cup. Team Bangladesh’s jersey has the imprint of tradition.

An abundance of green has always dominated the jersey published on BCB’s official Facebook page. There is also red color. This time, the cricket governing body of the country completed the task of unveiling the jersey virtually. BCB unveiled this jersey by publishing a video on Facebook.

In this year’s World Cup, the Tigers’ jersey features the traditional Jamdani of Bengal, Royal Bengal Tiger, and Sundarbans. Dark green has been used with dark red. There is also the addition of watermarks. The BCB logo is placed on the left side of the chest and the World Cup logo is on the right side. Bangladesh wrote in white under the chest.nTeam Bangladesh’s jersey is getting praise from netizens after its release of the jersey. Shakib will wear this jersey in the 22 yards.

After the failure of the Asia Cup, the team management is reorganizing the Bangladesh team. Several new cricketers have already been excluded from the Asia Cup team. Team Bangladesh’s goal is the World Cup this time. Team Bangladesh has already left the country to play the tri-nation series. T20 captain Shakib Al Hasan will join the team in New Zealand.

Bangladesh will play against Pakistan and New Zealand on October 7, 9, 12, and 13. At the end of that series, the Bangladesh team will go to Australia for the World Cup mission. Where Bangladesh’s first match is on October 24.