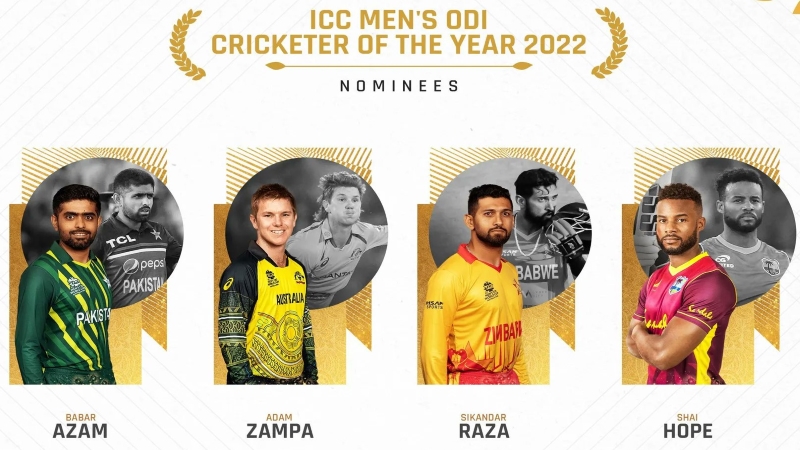 Babar Azam won the ICC ODI Cricketer of the Year award in 2021. The Pakistani captain has retained his form in ODIs. Babar has also been nominated as the best of the year as he has remained at the top of the ranking. Now three more will compete with him for this award. They are – Adam Zampa, Sikandar Raja and Shai Hope.

This year (the year 2022), Babar did not have the opportunity to play many matches in ODIs. Because the year passed with a full T20 schedule. Still, in the number of matches he has played, this Pakistani batsman has spread light with the bat. He scored 679 runs at an average of 84.87 from 9 innings. Babar also played 5 half-centuries with 3 centuries. He is currently the number 1 batsman.

Zampa is in the race to be the best of the year with Babar. This Australian leg spinner has played a total of 12 ODIs this year. Where he has taken a total of 30 wickets. Among them, 9 matches are at home. Where the conditions are not very favourable for spinners. After starting the year with 4 wickets, the white ball maintained its effectiveness till the end.

This year (the year 2022) there is a chance to become the best of the year in ODI in front of Raja. The Zimbabwean all-rounder has played a total of 15 matches. Where he has shown equal skill with bat and ball. Raja scored 645 runs with the bat in 15 matches. Where he scored 3 centuries and 2 half-centuries in innings. On the other hand, he took 8 wickets with the ball.

Another cricketer of the year, Hope has played a total of 21 ODIs this year (2022). Where this West Indies batsman scored 709 with the bat. Incredibly, since his debut in 2016, he has been the highest run-scorer for the Caribbean in ODIs every year. This time there is a chance to become the ICC player of the year. Let’s see who finally gets the ODI Player of the Year crown.