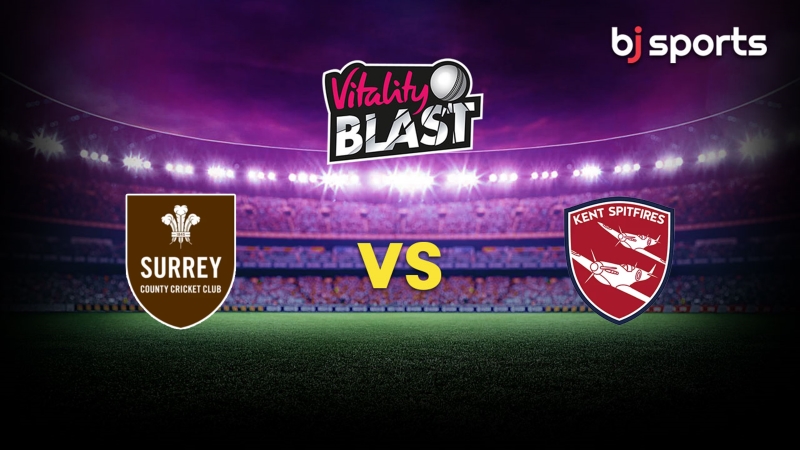 In the 2022 Vitality Blast, Kent Spitfires will play Surrey. On Friday, July 1st, the match will begin at 18:30 local time at The Kia Oval in London.

When Surrey lost to Essex Eagles in Chelmsford last Friday by 43 runs, it was the first time they had ever been defeated in any competition. Despite the return of Jason Roy at the top of the order and Reece Topley with the new ball, both of whom had played for England in the 3-0 ODI victory over the Netherlands, the 43 run defeat still occurred. Despite being defeated by the Eagles, Surrey continues to hold the top spot in the South Group. Surrey has already secured a spot in the quarterfinals with 19 points from 12 games and a seven point lead over fifth-place Gloucestershire.

Last Friday, Kent Spitfires defeated Sussex Sharks in Canterbury for just their third victory of the year. With six points from 12 games, the 2021 T20 Blast Champions are at the bottom of the South Group. They won’t go to the competition’s knockout round with a certainty, but they might still place as high as sixth if they win their last matches in a row. Grant Stewart took 3-38 against the Sharks, and George Linde returned very good figures of 2-14 from 4 overs as the visiting team was held to 158-8. In response, Joe Denly scored 58 at the top of the order before being followed home by Sam Billings (43) and Linde (24).

On the day of the game, London is forecast to have partly overcast weather with just a 60–70% chance of precipitation. We anticipate that there won’t be many weather-related delays to the game.

Due to the likelihood of rain and the DLS equation at this location, both teams have decided to bowl first.

The Kia Oval in London will host the game. At this location, the stadium is constantly packed with spectators who enjoy feasts of big hitting on a fast and true surface.

In their difficult 199-run chase, Will Jacks (26 runs), Jamie Smith (30 runs), and Rory Burns (37 runs) played attacking cricket. Chris Jordan, the skipper, gave it his all in the middle order, scoring 34 runs off 17 balls, but the team’s 20 over total of 155/9 resulted in a 43-run defeat. Together with other batters, Jason Roy, Laurie Evans, and Sunil Narine make up a potent batting core.

Kent used their 18.5 overs to chase down the 159/4 score. Sam Billings (43* runs) and Joe Denly (58 runs) scored significant runs throughout the chase. Jordan Cox and George Linde contributed with crucial cameos to keep the middle order scoreboard rolling. Sam Billings won’t be able to participate in this game due to national obligations.

Surrey CCC are the favorites to win this match.

Despite defeating Sussex Sharks last time, Kent Spitfires will be without Sam Billings, who is now back with England, and we anticipate that they will struggle against Surrey. The table-toppers will want to build up some winning momentum before the quarterfinals, and we anticipate a home victory.