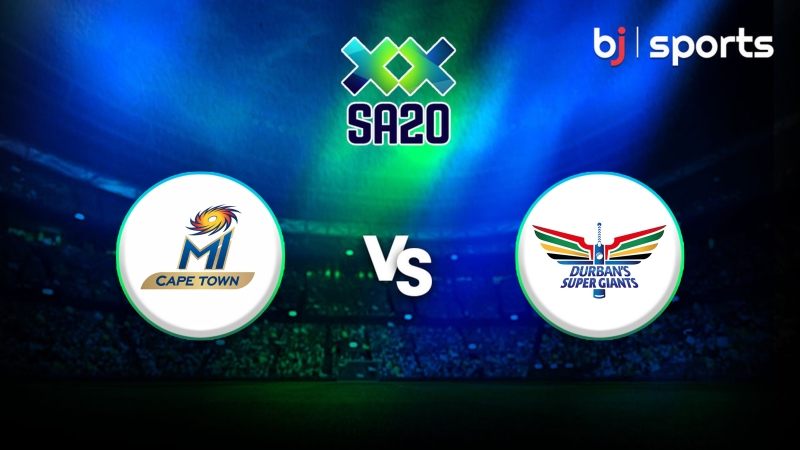 The SA20 match between MI Cape Town and Durban Super Giants takes place at Newlands on Friday night. With a victory over Paarl Royals by eight wickets, MI Cape Town got off to a strong start. In their opening match, the Joburg Super Kings defeated the Super Giants with a score of 16 runs. The start of this game is scheduled at 17:30 local time in Cape Town.

MI Although Cape Town entered their first game as the underdog, they defeated Paarl Royals with bat and ball superiority. They will be quite confident in their ability to replicate their performance and make it two wins in a row.

In Match 2, the Durban Super Giants managed to silence a couple of the Joburg Super Kings batsmen, but a few costly overs near the end of the innings were not enough to seal the game’s outcome. They may pose a threat to MI Cape Town if they improved their bowling.

Over the course of the match, humidity levels will rise, although not by an especially significant amount. The game will be played in cloud cover with a max temperature of 22 degrees.

In 58.3% of T20 matches at Newlands, the team that bats first wins, thus we would be shocked if either captain decided to field first in this game.

The Cape Town surface often has something to offer both bowlers and hitters. We anticipate a turn, a little pace, and a par score of no more than 170.

Although MI Cape Town defeated Paarl Royals with 27 balls left in their first game, there is still much more to come from them. After such a strong performance, it would be a huge surprise to see them make any adjustments for this game.

The Super Giants will be upset that they were unable to cross the finish line after registering 98-1 from their first 11 overs while chasing 191. The team management received a lot of support throughout the game, and we anticipate the same starting lineup for this contest.

The cricketing world will be watching this match on Friday night as it waits to see what Dewald Brevis and Jofra Archer can do in Match 5. To stop MI Cape Town from winning again, Durban Super Giants will need to put on a really great performance, but we believe that with Quinton de Kock in top form, the Giants are capable of doing just that. However, MI Cape Town’s bowling lineup appears to be among the strongest in the competition, and we anticipate them to victory once again in this match.