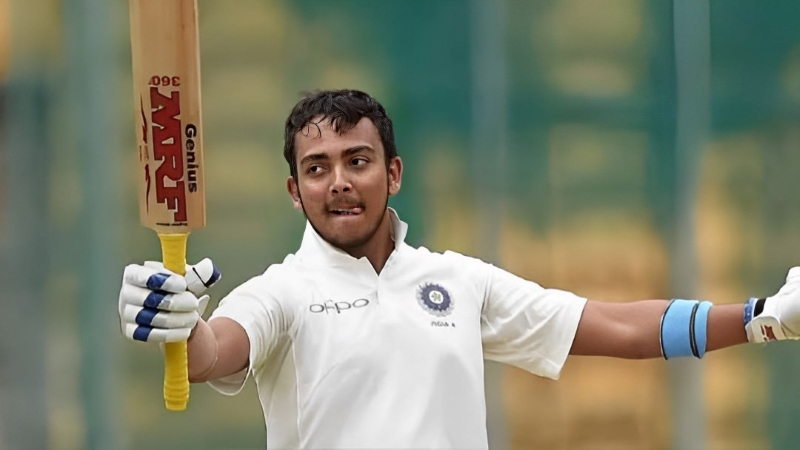 India’s young batsman Prithveesh started the year with a great innings. Ranji Trophy made a triple century in Indian cricket. This Indian batsman played a great innings against Assam. With an innings of 379 runs, he broke Sanjay Manjrekar’s record of second highest run scorer in Ranji Trophy history. Since then, this young Turk from India has been in the headlines. He is also receiving praise.

Bausaheb Nimbalkar is the highest individual run scorer in Ranji Trophy so far. He played an excellent innings of 443 runs with the bat in the Ranji Trophy in 1948-49 season. Nimbalkar was on fire with the bat for Maharashtra against Saurashtra. No one has been able to break this record of his till now. Although there have been many great charioteers in Indian cricket, Nimbalkar’s record remains intact.

Before Prithviraj’s innings, Sanjay Manjerekar was the second highest run scorer in Ranji history. In the 1990-91 season, he scored the second highest individual run of 377 runs in the Ranji Trophy. Which no one could break so far. And this time Prithvi did this. He scored 379 runs with 43 fours and 3 sixes. Through this brilliant innings, he topped Sanjay Manjrekar. Since then, this batter has been praised.

However, Prithvi was not getting runs in the beginning of this Ranji Trophy. But Gautam Gambhir stood beside him. Gambhir said that selectors, team management should help Prithvi to get back on track. He said, “A player like Prithveesh needs to be in rhythm. His international career has started tremendously, there is great talent. Age is on his side, he could be Team India’s long race horse. A person like him should be supported. The selectors and team management should help him get back into rhythm. He can give a lot to India if he gets support from the board. “

Notably, this 23-year-old cricketer represents Mumbai in India’s domestic first-class cricket. He mainly plays as a right-handed opening batsman in the team. In 2013, he scored a personal maximum run. This talented budding cricketer also scored a century in his international debut Test. Later, however, he was dropped from the national team. However, if his talent is developed, many people think that Indian cricket will be more prosperous.