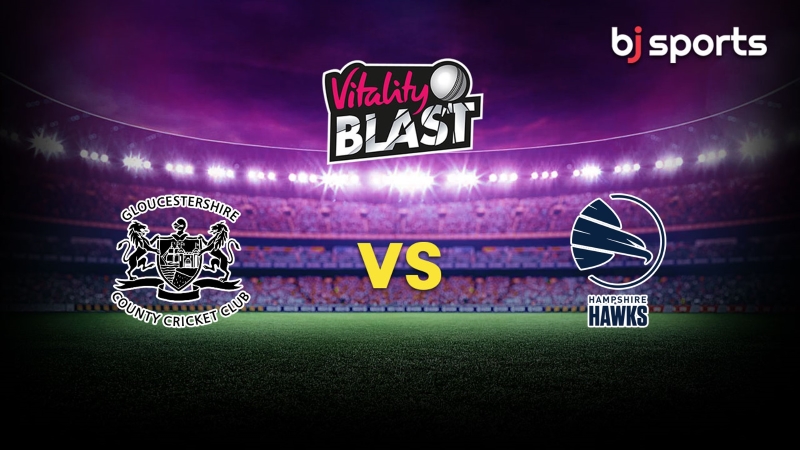 In the 2022 Vitality Blast, Gloucestershire will face Hampshire Hawks. On Friday, June 24th, the game will begin at 18:30 local time at The County Ground in Bristol.

T20 Blast is gaining traction in the league phase, with each team attempting to finish in the top four of the points table. Every team is vying for the two crucial points that will put them ahead of the other teams in the table. Hampshire lost their first four matches before gaining momentum and winning six of their next seven, including five in a row at one point.

Gloucestershire are currently in third place in the points table and will look to strengthen their position in the table with a win in this match.

Bristol is expected to have partly cloudy skies with only a 60-70 percent chance of rain on game day. We anticipate a full match with few weather interruptions.

Both teams will bowl first because rain and the DLS equation are expected at this venue.

The match will take place at Bristol’s County Ground. This wicket has a lot of pace and bounce, and the bowlers are always in the game.

James Taylor and Mathew Hammond have been on a roll this season and will be hoping to keep it going in this match. Tom Smith contributed a wicket, and their remaining bowlers kept their cool in crucial situations to help their team win by 5 runs in a last-ball thriller. So there will be no change in their XI.

Hampshire finished their 20 overs with a big score of 208/5. James Vince (129 runs) and Tom Prest (62 runs) both scored big runs, and their 144-run partnership set the tone for the rest of the game. In this match, the remaining players scored only 9 runs. In the previous game, Liam Dawson and Chris Wood each took two wickets. Brad Wheal and Nathan Ellis both bowled economical overs and took a wicket in the match. They won the match by 14 runs after limiting the opposition to 194/9. So there will be no change in their XI.

Hampshire Hawks are the favorites to win this match.

This should be an exciting match between two teams desperate to finish in the top four of the South Group. Gloucestershire are always competitive, but we believe James Vince and Hampshire Hawks will be too powerful for them in this match.