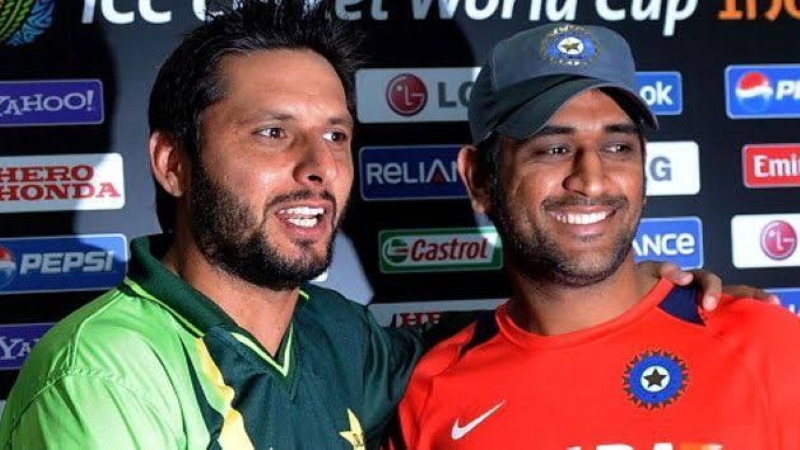 Whether World Cup or any event, the India-Pakistan match is full of excitement. The two teams will face each other in the upcoming T20 World Cup on October 23. Before that, former Pakistani captain Shahid Afridi opened up about the fight between the two arch-rivals.

Dhoni and Afridi retired for several days. However, in the 22 yards of the field, their names are still coming back and forth. According to Afridi, India used to play one-sided cricket under the leadership of Mahendra Singh Dhoni.

Under Dhoni’s leadership, India has defeated Pakistan 5 times in T20 World Cup. Besides, they were defeated 2 more times in ODIs. At that time, it was assumed that the India-Pakistan match in the ICC tournament meant victory for India. It has become so natural that due to being one-sided, even the fight between the two parties has lost its color.

In this context, Afridi said, ”Indian team changed under the leadership of Dhoni. All India-Pakistan hostilities ended. Because India always won under the leadership of Dhoni. At that time, the main enemies in front of them were teams like Australia, England, and South Africa. Now the situation has changed. Pakistan has become their main opponent again.”

Referring to the recent fight between the two teams, Afridi also said that since Dhoni’s retirement, Pakistan has returned to its old ways against India. He thinks that Pakistan’s two wins in the last three appearances prove that. Even a few days ago, Pakistan defeated India in the T20-format Asia Cup match.

There is already excitement around the India-Pakistan match of the World Cup at the peak. Tickets are sold out. Let’s see who wins in the end. India has a chance to avenge the Asia Cup. And Babar Azam has a chance to repeat the last match.