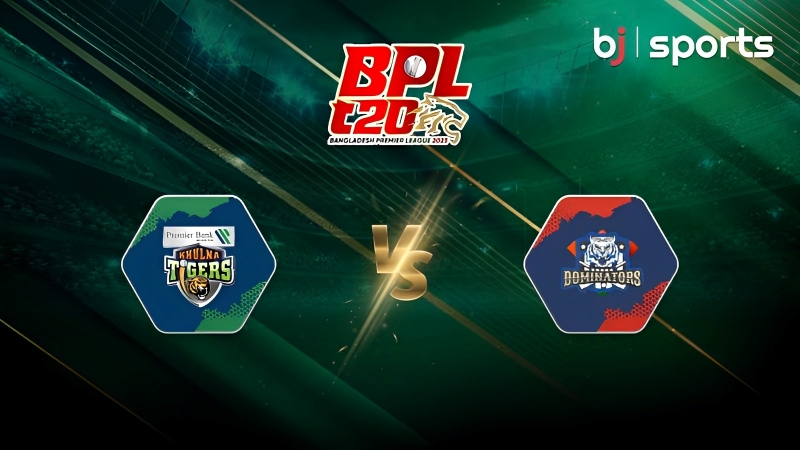 Khulna Tigers and Dhaka Dominators will square off in game 24 of the 2022–23 Bangladesh Premier League on Tuesday night at the Sher-e-Bangla National Stadium. With Dhaka at the bottom of the standings with just one victory out of seven, the Tigers have won two of their five games. In Mirpur, the game starts at 18:30 local time.

After defeating the Challengers and the Riders in their last two games, Khulna Tigers’ hitters and bowlers are playing with more confidence. They will think they have a good chance of winning again in this game.

An already dismal sequence of results became even worse for Dhaka Dominators on Monday night as they lost badly against Comilla Victorians. Regardless of the opponents, Dhaka does not appear to be capable of winning.

The match will take place in lovely, cool weather in Dhaka.

Six of the 10 games played this season at the Shere Bangla National Stadium were victories for the teams chasing. The toss winner will probably choose to field first.

The pitch at Dhaka’s Shere Bangla National Stadium typically favours hitters while also providing some assistance to spinners and seamers.

Khulna Tigers kept their starting lineup unaltered for their encounter against Chattogram Challengers on Friday after finally figuring out a winning combination in Match 15 against Rangpur Riders. No players have reported any injuries, so we anticipate the same starting lineup to play in the third straight game.

In the Dhaka Dominators’ loss to the Comilla Victorians on Monday, Mizanur Rahman was given a chance to bat first. As the management continues to look for the winning formula, he was one of three alterations to the team.

Khulna Tigers are the favourite to win this match.

Nasir Hossain is still having a really successful tournament as an individual, but he is currently struggling to motivate his colleagues to succeed as well. Unfortunately for the Dominators, the Khulna Tigers, who have been in outstanding form lately, will be their opponent. Although we anticipate the Dominators to perform better than they did on Monday, we are picking the Tigers to prevail in this game.