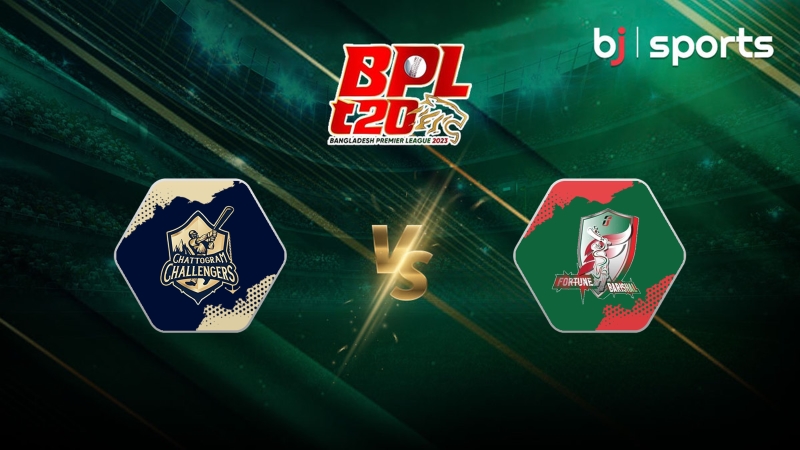 On Friday afternoon in Chittagong, Chattogram Challengers will face Fortune Barishal in Match 9 of the 2023 Bangladesh Premier League. Both clubs enter this match having won one and lost one of their first two games. The game begins at 14:00 local time at the Zahur Ahmed Chowdhury Stadium.

Chattogram In the previous game, the Challengers batted brilliantly to reach their goal of 179 with four balls to spare. They will, however, face a much stronger bowling unit in this game.

After losing their first game, Fortune Barishal understood the need of winning in any way possible in Match 7. They will be seeking to build on their win in this match.

This game will take place in the hottest part of the day when temperatures reach 25 degrees. During the match, there will be no cloud cover.

Mehedi Maruf, Darwish Rasooli, Al-Amin, Nihadussaman, and Malinda Pushpakumara, who were part of the Challengers lineup in their opening game loss to Sylhet Strikers, were changed before the triumph over Khulna Tigers. We’d be surprised to see any changes following such a great showing in Match 6.

After losing their first match to Sylhet Strikers, Fortune Barishal made only one change to their starting lineup, with Haider Ali being replaced by formidable Afghanistan batter Ibrahim Zadran. Barishal’s batting lineup is quite fluid, with individuals capable of hitting large scores all the way up the order.

Fortune Barishal is the favorite to win this match.

In the first game of this season’s Chittagong phase, two of the top clubs from last year’s BPL will face off in an intriguing fight. Both teams have strong batting lineups, so bowlers on both sides will need to be accurate and varied. We believe Fortune Barishal’s bowling lineup is superior, and we expect them to win this game.