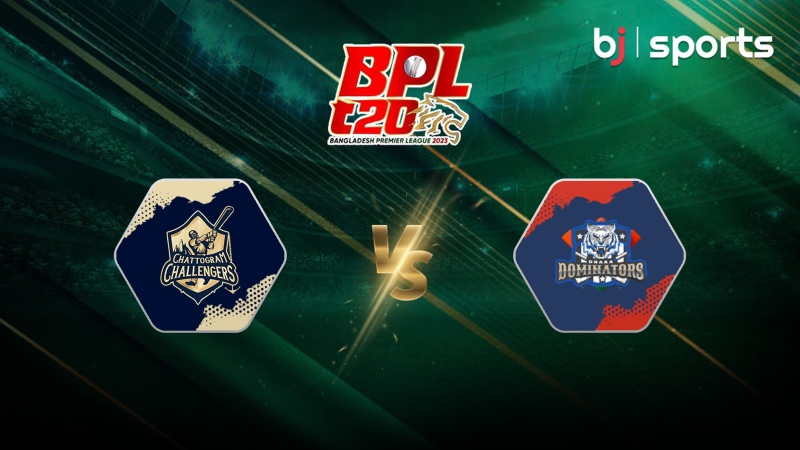 On Saturday night at the Zahur Ahmed Chowdhury Stadium, match 12 of the Bangladesh Premier League pits Chattogram Challengers and Dhaka Dominators against one another. So far in the competition, both sides have won one game, however, the Challengers have lost two as opposed to the Dominators’ one. At 18:30 local time in Chittagong, the game begins.

The Challengers have played well in both of their most recent matches, despite winning one and losing the other. They will be confident that they can win this game and defeat the Dominators.

Dhaka Dominators’ last game ended in a crushing loss, thus they must get out to a strong start if they are to regain their confidence. They do, however, have several great players who will guarantee a close game.

On the day of the game in Chattogram, the weather will be clear with a high of 26 degrees Celsius.

The statistics for batting first and second at this venue in T20Is and domestic T20s don’t change all that much. However, batting second may be advantageous because this will be the second game of the day.

It is an excellent surface for batters since they can play their strokes freely even while facing spin bowling, which is typically seen as difficult on subcontinental pitches.

It was unexpected to see any changes in the Chattogram Challengers XI on Friday after they defeated Khulna Tigers in their previous match by a margin of nine wickets. Mehedi Hasan Rana was dropped from the squad in favor of Taijul Islam, who was making his competition debut.

The club management stuck with the lineup that defeated Khulna Tigers in Match 3 as Nasir Hossain took the field against Sylhet Strikers. There have been no injuries recorded, so we anticipate them to pick the same lineup for this game.

Dhaka Dominators are the favorite to win this match.

This matchup between two teams who have already displayed hints of their brilliance is one that we anticipate being quite close. On this pitch, we anticipate the Chattogram Challengers XI to make a strong start to the innings thanks to the big-hitting ability at the top of the lineup, which will undoubtedly result in some large scores. Overall, we believe Dhaka has a stronger starting XI and are picking them to win this game.