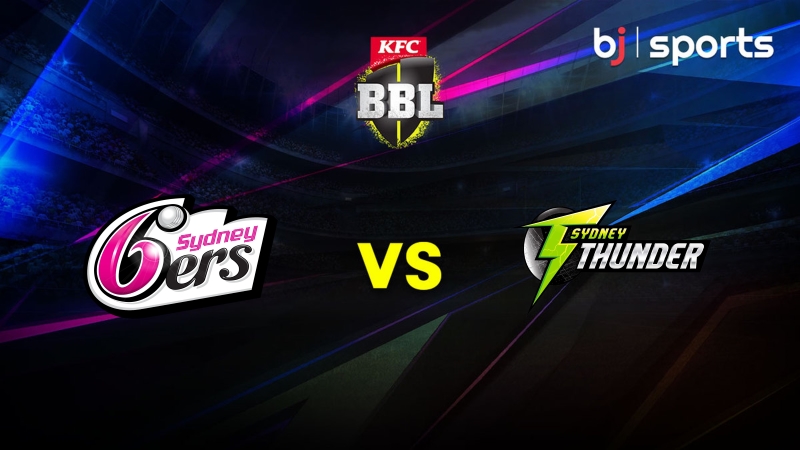 Match 50 of the 2022-23 Big Bash League pits the Sixers against the Thunder on Saturday evening at the Sydney Cricket Ground. The Sydney Sixers are second in the standings and have already qualified for the playoffs. Sydney Thunder would be very close to clinching their position in the playoffs with a win. This match will begin at 19:05 local time at the SCG.

Sydney Sixers remain one of the strongest BBL teams and appear to be on track for a fourth consecutive BBL final. They’ll be fired up for this derby game.

Thunder had been on a terrible run of form until thumping the Melbourne Renegades. With a win over their city rivals, they will move into fourth position in the table.

Throughout the match in Sydney, there will be plenty of overhead gloomy skies, with temperatures no higher than 22 degrees.

Over the last few seasons, the average first innings score in a T20 at the SCG has ranged between 170 and 155. There is always good pace on the wicket, as well as a turn for the spinners.

Off-spinner Nathan Lyon missed Sydney Sixers’ last game, against Adelaide Strikers in match 45, due to a knee injury, and we expect him to be rested for this match. With such a critical derby, we expect the Sixers to field their strongest lineup.

There has been no word on Gurinder Sandhu’s rehabilitation from a calf injury, so we anticipate he will be out for this game. Blake Nikitaras, a 22-year-old batter, made his BBL debut in the win against Melbourne Renegades but did not bat, thus we expect him to be selected again for this match.

Sydney Sixers is the favorite to win this match.