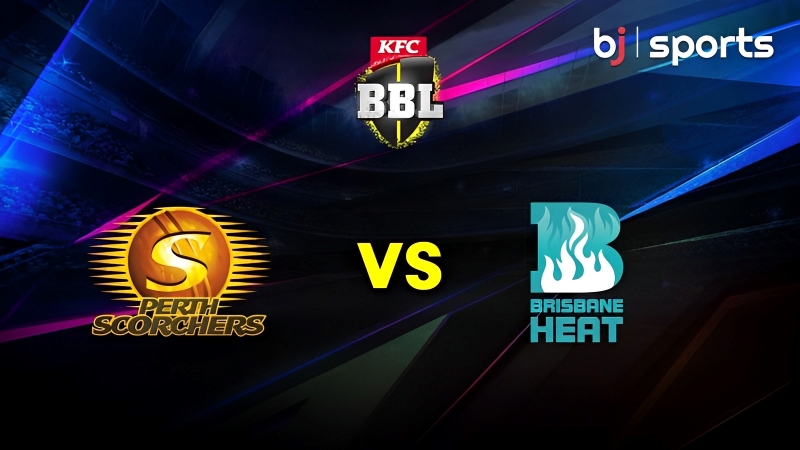 On Saturday night at Perth Stadium, Match 33 of the 2022–23 Big Bash League pits Perth Scorchers against Brisbane Heat. Despite being in first place, the Scorchers dropped their most recent match. Brisbane Heat is currently in last place in the standings but has won their last two games. At 20:45 local time on January 7th, the game begins in Perth.

The Perth Scorchers won the competition the previous year, and despite falling to their closest rivals, Sydney Thunder, in the last game, we anticipate that they will be superior to Brisbane Heat in every way.

Brisbane Heat will want to show they can compete with the top teams after being on track for a high score against Sydney Sixers before the rain started to fall. The Perth Scorchers will present even greater competition in this match, though.

On Saturday, Perth’s weather will be warm and windy.

Four of the five games played at Perth Stadium this season were victories for the side chasing. The toss-up winner will probably choose to bat second.

Pacers who enjoy the bounce and seam movement that the track at Perth Stadium provides will find it to be quite favourable. Although it isn’t the most straightforward pitch to bat on in the dark, batters who spend some time in the middle will have a good chance of scoring a lot.

Aaron Hardie and Jhye Richardson both suffered injuries and are anticipated to miss this game. The top Wicket-taker for the Scorchers, Richardson, will be out for the next two weeks. After finishing his BBL contract, Faf du Plessis will likely be replaced by Stevie Eskinazi.

Brisbane Heat has only been unable to deploy their strongest XI due to international Test call-ups, as has been the case for the majority of the season. Michael Neser is eligible for this given thought Usman Khawaja, Marnus Labuschagne, and Matt Renshaw is all currently playing at the SCG.

In their matchup with the Sydney Sixers, the Brisbane Heat showed grit. They also had players who are in form and they are Colin Munro, Michael Neser, Nathan McSweeney, and James Bazley. It remains to be seen if those will be sufficient to trouble the top of the table side. Despite having a strong team, the Perth Scorchers will be weaker without Jhye Richardson. They have only stumbled in two games so far in this campaign, and we anticipate that they will resume winning ways in this game.