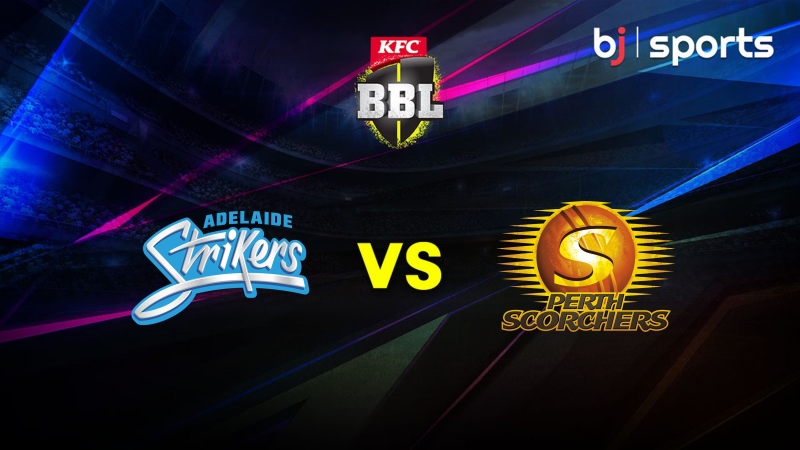 At the Adelaide Oval on Friday afternoon, Adelaide Strikers and Perth Scorchers will play in Game 48 of the 2022–23 Big Bash League. Despite being in fourth place in the standings, the Strikers have dropped their last three matches. With nine victories, the Perth Scorchers are leading the table. Adelaide kicks off this game at 6:00 local time.

As the group stage is about to come to a finish, Adelaide Strikers have fallen out of form. They only have two games left, and one of those games is against the team at the top of the standings.

The Perth Scorchers, who appear to be on track to defend their championship from the 2021–22 season, had another strong group stage. They are in great shape, and we fully anticipate them to win in Adelaide.

There will be some cloud cover in the sky. 14 to 24 degrees Celsius will be the temperature range. At 15 to 30 km/h, the wind will be blowing from the west.

At the Adelaide Oval, teams who bat first have won 58.7% of BBL games. We, therefore, anticipate that both captains will opt to bat first in this game.

First-inning batting is encouraged by the pitch. It provides a high bounce and swings in the later stages for pacers.

Peter Siddle, the team’s captain, is anticipated to return to lead the squad in this match after missing the journey to Coffs Harbour for Match 45 versus Sydney Sixers due to a back injury. Jake Weatherald will continue to miss practice because of an abdominal issue.

It would be surprising if Perth Scorchers made any changes to their starting lineup after defeating Hobart Hurricanes by seven wickets with 15 balls remaining in Match 46. The following game is when Jhye Richardson is anticipated to return from a hamstring injury.

Perth Scorchers have been playing outstanding cricket throughout this competition, despite their loss to Sydney Sixers in Match 43, their group-stage rivals. The Adelaide Strikers have played some terrific games, but they have had trouble staying consistent from game to game. We anticipate another victory for the Perth Scorchers in this game.