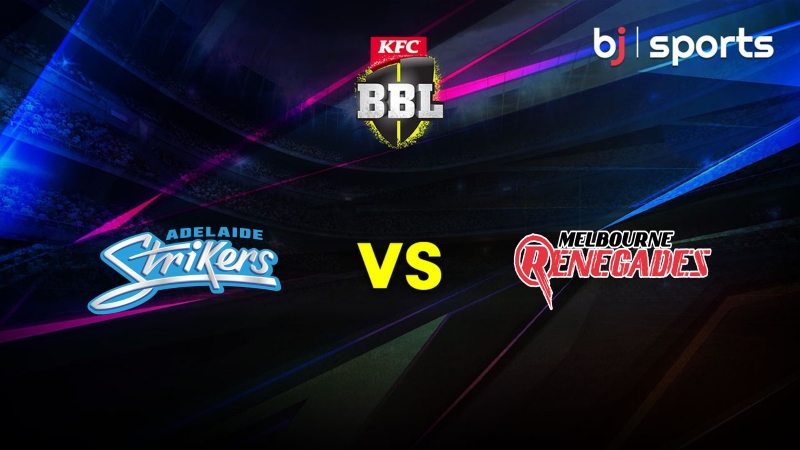 On Tuesday night, Adelaide Strikers and Melbourne Renegades play in Game 35 of the 2022–23 Big Bash League at the Adelaide Oval. The Strikers have eight points after eight games, which puts them in fifth position. The Renegades are positioned in the table with 10 points after nine games. At 19:10 local time, the game begins in Adelaide.

In their most recent game, the Adelaide Strikers displayed incredible grit as they chased down a BBL record aim of 230 to return to winning ways. They’ll think they can win any game and be confident in their prospects when playing the Renegades.

Before their season got back on track with a win over their local rivals, the Melbourne Renegades were on a protracted losing streak. They’ll be competitive the entire match and arrive in Adelaide prepared to fight.

It will be sunny in the last stretch of the game with a little more cloud cover. Throughout the game, it will be warm with a temperature in the 20s.

We predict that Adelaide Strikers and Melbourne Renegades will wish to field first in this match after winning the previous game at this venue and selecting to field first.

On this field, the lowest BBL score (15 by Sydney Thunder) and highest BBL chase have both occurred this season (230 by Adelaide Strikers). It is a great batting surface with a decent pace and bounces for quick bowlers.

The Adelaide Strikers’ starting lineup will be altered for this match because Afghan leg-spinner Rashid Khan has fulfilled his assignment and joined MI Cape Town in the SA20 league. Additionally, we anticipate captain Peter Siddle to recover from injury and that Travis Head and Alex Carey will join the team right away following the Test series against South Africa.

Marcus Harris made his debut in the victory over Hobart Hurricanes after sitting out the previous games of the competition due to his inclusion in the Australia squad for the Test series. Although spinners Akeal Hosein and Mujeeb Ur Rahman have left for the ILT20 in the UAE, there are no fresh injuries.

Adelaide Strikers is the favorite to win this match.

In this match at the Adelaide Oval, we anticipate lots of runs from two evenly matched teams. The Strikers will be aiming for the Renegades in the table and enter this game knowing that a victory will put them ahead of their rivals. We are supporting Adelaide Strikers to win this match again since they appear to have the stronger batting lineup.