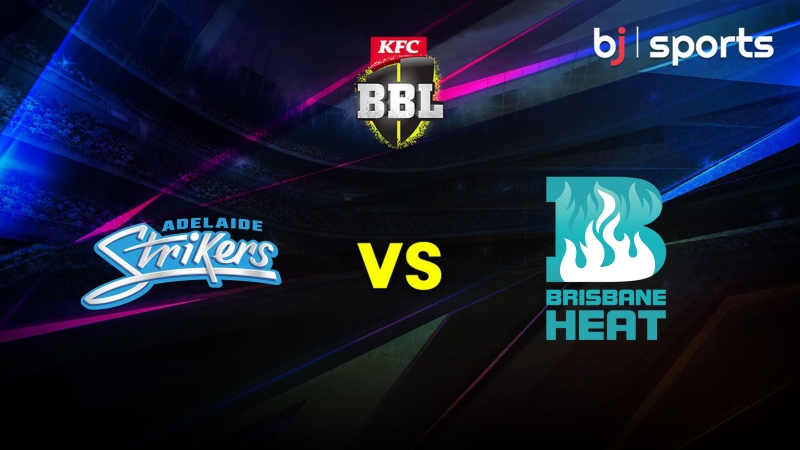 On Saturday afternoon at the Adelaide Oval, the Adelaide Strikers will face the Brisbane Heat in match 40 of the 2022-23 Big Bash League. So far, the Strikers have won five and lost five of their ten games. In the tournament, the Heat have won only two of their nine games. The game begins at 15:30 local time in Adelaide.

Adelaide Strikers lost a close game earlier in the season in the reverse matchup and will be desperate to win this match. They will be a very difficult side to beat with their returning Test players.

The return of their Test players was insufficient to return Brisbane Heat to winning ways in their most recent encounter, and they enter this game at the bottom of the standings. It will be difficult to return from Adelaide with a victory.

The side that bats first has won 58.1% of T20 games at the Adelaide Oval, and we predict that both captains will choose to bat first in this encounter.

The Adelaide pitch has always provided a strong duel between bat and ball, but it has favored the batters this year. In this match, we anticipate a par score of more than 180.

Captain Peter Siddle returned to the side for Thursday’s big defeat away to Melbourne Stars, and we anticipate him to be joined in the XI for this encounter by returning Test stars Alex Carey and Travis Head. Colin de Grandhomme will be missing for around a week due to a hamstring injury.

Brisbane Heat welcomed back their Test trio of Usman Khawaja, Marnus Labuschagne, and Matt Renshaw against Perth Scorchers at the Gabba on Wednesday, but they could only contribute scores ranging from 10 to 28. There are no changes expected ahead of this match.

Adelaide Strikers is the favorite to win this match.

Although winning a T20 match only requires one exceptional effort, the Brisbane Heat lineup contains very few batsmen capable of producing such innings. When you compare that to the Adelaide Strikers lineup, you can see why nearly all commentators believe the Strikers will win this game. We anticipate large scores from Adelaide Strikers batsmen and forecast a win for them over Brisbane Heat.