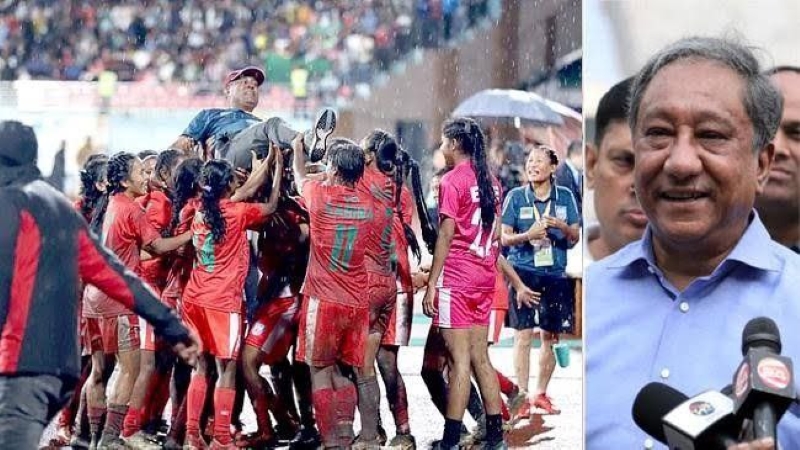 Entire country is floating in a wave of joy over Bangladesh women football team’s win the SAFF Championship. Along with the whole country, the Bangladesh Cricket Board is also praising Sabina Khatuns. Not only appreciation, BCB also announced a prize of taka 50 lakh. In a press release, BCB said, BCB President Nazmul Hasan Papon has announced this amount for women footballers.

Bangladesh women’s football team confirmed their victory by defeating Nepal in the SAFF final held in Nepal on September 19. Sabina Khatun’s team defeated Nepal 3-1 to become the SAFF champion for the first time. The BCB president said that this championship has made the entire nation proud. And for this reason, he also said to give them a reward of taka 50 lakh.

BCB president Papon said in the statement, “As a mark of our appreciation and support for their effort, I am declaring Tk 50 lakh for the entire team on behalf of the BCB.”

Papon also said about this win, “I have no doubts that the SAFF triumph will greatly inspire sportsmen and women around the country and sports teams to strive for international glory in respective disciplines.”

Meanwhile, the Mymensingh district administration has announced an award of 50 thousand taka to each of the families of the 8 footballers of Kalsindur village who clinched the title. On the other hand, Bangladeshi cricket stars Shakib-Tamim-Mushfique expressed their joy over the victory of Sabina Khatun. Congratulated the Bangladesh women’s football team. Many people also think this women’s victory will create a new tide in the country’s football.