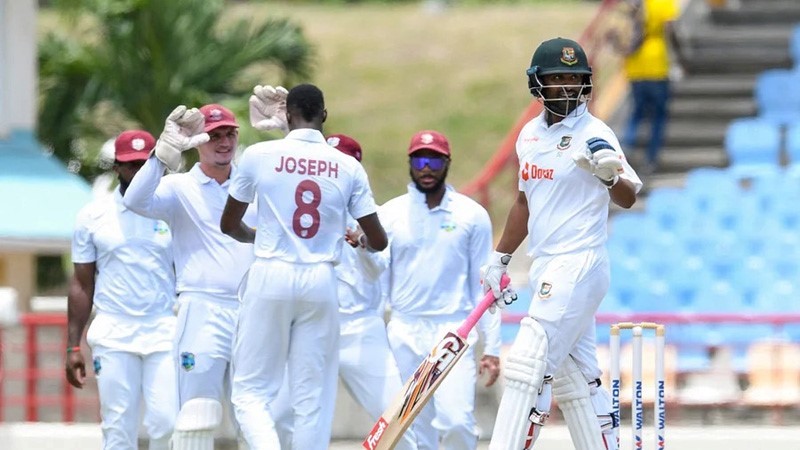 In the first innings of the St. Lucia Test, visiting Bangladesh scored 234 runs with the help of Liton Das’s half-century and some needy contributions from the tailenders. The Tigers were bowled out after batting for 64.2 overs. After coming down to the field for batting in their first innings, the host West Indies ended the first day’s play with 67 runs in 16 overs without losing a wicket. Where their run rate was 4.18.

Earlier, after losing the toss and batting first, Bangladeshi opener Tamim Iqbal reached nearby the half-century despite losing the wicket of Mahmudul Hasan Joy (10). But the left-arm opener missed his 32nd fifty of his career for just 4 runs.

In the 23rd over of the innings, Tamim was caught at the cover point on Alzarri Joseph’s ball. His 46-run innings off 67 balls was decorated with 9 boundaries. The visitors went to the lunch break on the first day with 77 runs for 2 wickets in 26 overs.

Coming back from the break, Najmul Hossain Shanto and Anamul Haque were on the wicket for the Tigers. Anamul could not do justice to his name by returning to the team after more than 7 years. Anamul and Shanto both were out for the team’s 105 runs.

Anamul was the first victim of lbw off the ball of debutant bowler Anderson Phillip. In the next over, Kyle Mayers got the wicket of Shanto with an lbw. Anamul played 33 balls and scored 23 runs and Shanto scored 26 runs off 73 balls.

After Shanto and Anamul, Shakib Al Hasan and Liton Das formed a partnership. But this pair could not go far. After making a pair of only 20 runs, Jayden Seales separated them. Captain Shakib Al Hasan was bowled by Seales after scoring just 8 runs.

Wicketkeeper-batsman Nurul Hasan was dismissed as the No. 6 batsman. He could not handle a bouncer off Alzarri Joseph that came up on the leg stump. He was caught by wicketkeeper Joshua Da Silva as he edged the ball over his neck. Nurul returned with 7 runs.

Mehidy Hasan was playing comfortably with Liton. But he was misfortunate. He got out with a great catch by substitute fielder Thomas in the delivery of Kyle Myers. Standing on the point, he jumped on Long Third man and caught the catch. Mehidy was dismissed for just 9 runs.

Despite losing wickets at regular intervals, Liton was leading the team from one end. He scored the highest 53 runs for the team. He also picked up the 14th half-century of his career. Ebadot Hossain and Shoriful Islam put on a good partnership for the ninth wicket. Shoriful was dismissed for 26 off just 17 balls. On the other hand, Ebadot Hossain remained unbeaten with 21 runs.

Jayden Seales and Alzarri Joseph of West Indies took the maximum number of 3 wickets each. In addition, Anderson Phillip and Kyle Mayers took two wickets each.

The hosts are in a good position in their first innings in response to 234 runs. Bangladesh’s five bowlers could not take a single wicket on the day. Caribbean captain Kraigg Brathwaite is unbeaten on 33 off 55 balls and John Campbell is unbeaten on 32 off 41 balls. 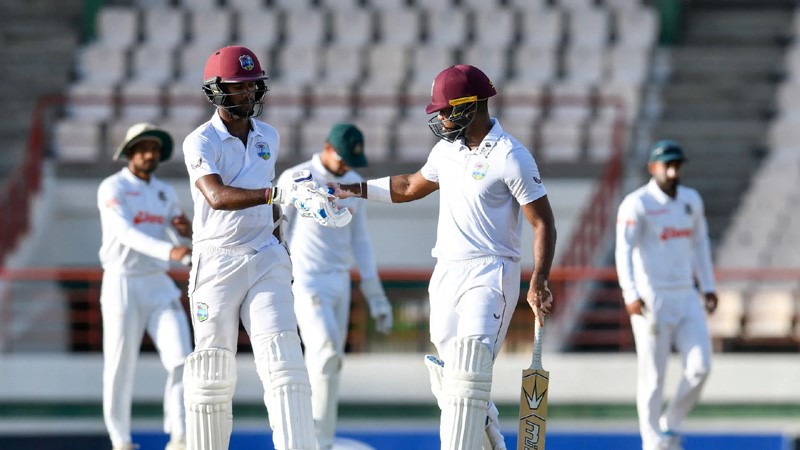