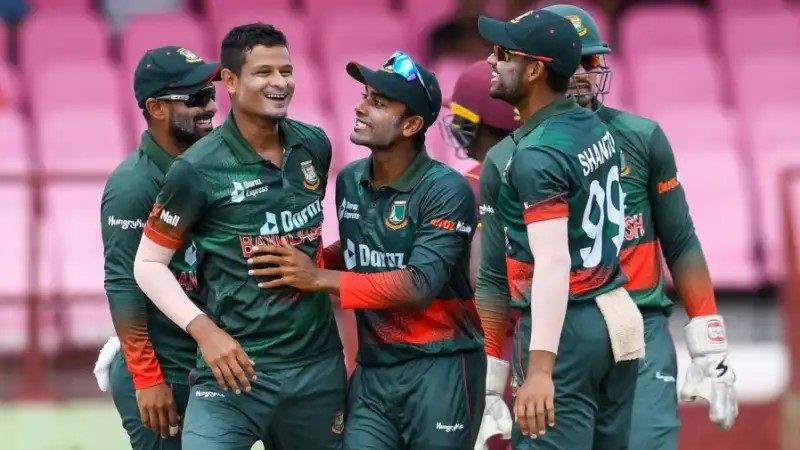 The visiting Bangladesh has grabbed the crown of the ODI series against the host West Indies with one match in hand by showing a great bowling and batting performance. The Tigers have got triumphed on the second ODI of the series in Guyana against the Caribbeans by 9 wickets with 176 balls left in the game.

With this win, Bangladesh has managed to get wins in all the last five ODI series. Earlier in 2015, the Tigers showed the glory of winning five consecutive series. They won six consecutive series in the 2014-15 season.

Bangladesh cricket team won the toss in the second match of the ODI series against West Indies. Like the first match, captain Tamim Iqbal elected to field first in the second instance as well.

The responsibility of bowling in the first over was handed over to Mosaddek. However, the right-arm off-spinner could not do much in the short spell of two overs. Bowling from the other end, Mustafizur Rahman also couldn’t make the captain pleased.

Learning from the mistakes of the previous match, Mayers and Hope played gently in the opening pair. Hope was on the strike at the fifth over, when Mehidy came into the attack. The batter wasn’t quite happily making it into the bat and ball.

Hope went forward to hit Miraz’s dangling arm ball. The ball went behind the wicket as it found an outside edge of his bat. But Sohan could not glove it. As a result, the first opportunity was missed.

Sohan could have stumped Hope as he left the wicket with the same ball. But instead of the ball, he broke the stumps with his hands. As a result, Hope survived two times on the same ball.

In the eighth over of the innings, Hope was almost sent back to the dressing room by left-arm spinner Nasum Ahmed. Hope did not get a run in the first five balls of his over. Nasum bowled the last ball with a gentle flight on the off-stump.

While playing in a defensive posture, Hope could not make a connection with the bat, the ball went into Sohan’s gloves. The umpire responded positively to the strong appeal. However, Hope saved his wicket with an immediate review. West Indies managed to score only 26 runs in 10 overs of the first power play.

After two overs in the first spell, Mosaddek was again brought back into the attack in the 11th over. Mayers was bowled directly in one of his great off-spins. Mayers, who suffered Bangladesh in Test and T20Is, got out scoring 17 runs from 36 balls.

Nasum didn’t let Brooks last long after Mayers made his way back to the pavilion. Having bowled two maidens in his first three overs, Nasum got hit for a boundary off the third ball of the fourth over. It took only one ball for him to turn around. Brooks did not find a good way to play Nasum’s armor in the fifth ball of that over.

Then the spinner struck twice in his 6th, which was the 17th over of the innings. Hope was playing defensively from the start, he tried to play a kneeling sweep on the fourth ball of the over. But because of the variation in speed, the ball went up with the edge of Hope’s bat.

Mosaddek ran back and palmed the ball brilliantly just after the short mid-wicket region. After one ball, Pooran got back to the dressing room being undone. The Caribbean captain was bowled by getting an inside edge of the bat while trying to make a reverse sweep.

The procession of losing wickets did not stop for the hosts from then. They lost the fifth wicket after scoring 69 runs in the 26th over. Shoriful Islam hit the blow then. The left-handed pacer picked up Rovman Powell in his second over.

Powell (13) flicked Shoriful’s back-of-length delivery that was on the stumps, and Mahmudullah Riyad took an easy catch at short midwicket as the batter mistimed it.

In the next over, Mehidy Hasan Miraz picked up two wickets in two consecutive balls. He sent off Brandon King (11) and Akeal Hosein (2).

Then it looked like the tail would be trimmed soon. In the 31st over, Miraz again picked up a pair of wickets. After losing 9 wickets for 86 runs, the Caribbeans were in danger of collapsing before scoring a hundred.

But Keemo Paul played well and made the hosts pass the hundred. The lower order made a partnership of 22 runs from 26 balls on the tenth wicket with Gudakesh Motie. In the end, Miraz trapped Motie with an LBW. Paul remained unbeaten on 25 off 24 balls. And their team total stood at 108 runs losing all of their wickets.

Miraz was the most successful bowler in the Tigers’ camp. He scalped 4 wickets with conceding 29 runs in 8 overs. Nasum took 3 wickets giving only 19 runs in 10 overs. Shoriful and Mosaddek took one wicket each for the visitors.

The bowlers did half the work. The target in front of Bangladesh was only 109 runs. Left-arm batsman Nazmul Hossain Shanto replaced Liton Das with Tamim Iqbal. The Caribbean bowlers could not put the two openers in any danger early on. Tamim and Shanto were playing very carefully. They picked up 48 runs in the pair.

But he could not get out of the habit of giving away wickets while playing pleasingly. In the 13th over of the innings, the left-handed batsman was caught out while trying to hit a six on the cow corner off Motie. He scored 20 runs off 36 balls with 2 boundaries.

However, the Tamim-Liton pair did not give any chance to the Caribbeans after that. On the second wicket, they left the field after winning the match with an unbroken partnership of 64 runs from 51 balls.

Tamim has picked up the 53rd half-century of his career by hitting a boundary. Then the team needed only 1 run to seal the victory. Tamim remained unbeaten with 50 runs in 62 balls and he smashed 7 boundaries on the day. Liton made 32 with 6 fours playing 26 balls.

Player of the match – Nasum Ahmed 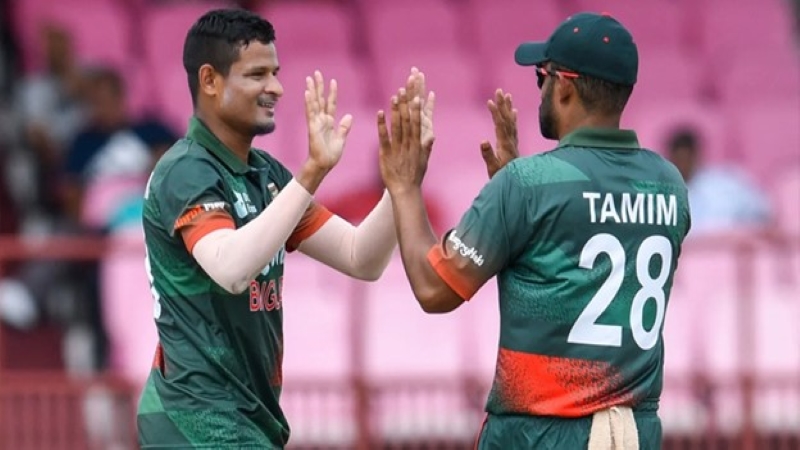