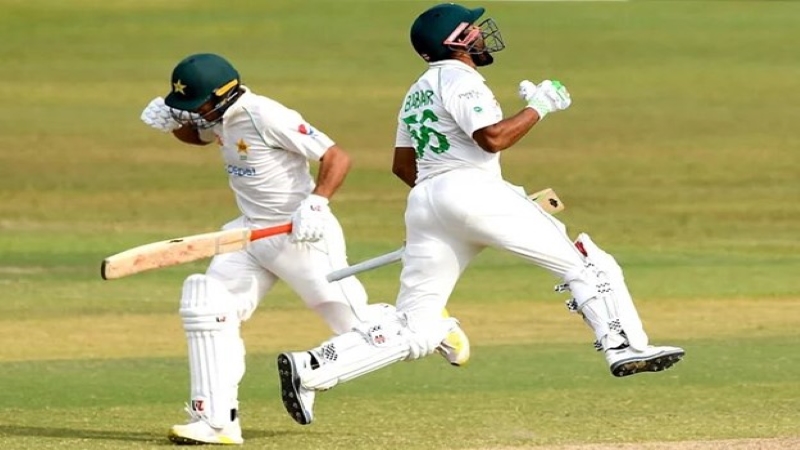 After restricting Sri Lanka to 222 runs, everyone thought that Pakistan would climb the mountain of runs. But it was not the same as fans might have thought. The Pakistanis fell into a great batting disaster when they came down to bat. For them, 5 wickets for 73 runs, 7 wickets for 85 runs, and 9 wickets fell for 148 runs.

After that, Babar Azam and Naseem Shah put on a remarkable partnership of 70 runs in 30.5 overs in the last wicket pair. Among them, the number 11 batsman Naseem remained unbeaten with 5 runs off 52 balls. Babar Azam tackled the rest of the balls.

Not only that, Babar scored an incomparable century standing in the rubble that was created in the Pakistani batting lineup due to the Lankan bowling. When he was out as the last batsman facing 244 balls, his score was 119 runs smashing 11 fours and 2 sixes. Earlier, Babar and Mohammad Rizwan made the team’s second highest 40-run partnership for the fourth wicket.

As a result, Pakistan was all out for 218 runs in their first innings in response to Sri Lanka’s 222 runs. They got a lead of just 4 runs although they’re dreaming of getting a big lead. Babar alone scored 119 runs out of Pakistan’s 218 runs. All the rest scored 99 runs together.

This is Babar’s 7th Test century in his career. However, cricket experts have already started writing his name on the list of legends the Pakistan captain is playing some impeccable innings in one match after another. Rizwan (19) was the second highest scorer in the Pakistani innings. Yasir Shah scored 18 runs, 17 runs came from Hasan Ali’s bat.

Prabath Jayasuriya, the left-arm spinner who had just knocked out Australia with the ball, was also furious on the day. He took 5 of the first 7 wickets of the Lankans. Through this, Jayasuriya took 5 wickets in the first three innings of his career. Only two cricketers – Australia’s Clarrie Grimmett and England’s Tom Richardson – have made such a record before him.

Babar lost his partner Azhar Ali (3) on the third ball of the day. Then leaving him as a helpless spectator at one end, Rizwan and Mohammad Nawaz (5) also joined the farewell procession. Babar was holding into the wicket at one end amid the team’s failure. By scoring 21 runs, he reached the milestone of 10,000 runs in international cricket.

Pakistan lost 7 wickets for 85 runs. Their score was 104 runs for 7 wickets at the lunch break, Babar’s score was 34 runs then. Babar built up a pair of 27 runs in the eighth wicket with Yasir, and 36 runs with Hasan in the ninth wicket partnership. That means, Babar offered Pakistan 133 runs with the bottom three batters in the last three pairs.

Babar got his fifty (98 balls, 5 fours) shortly before Hasan got out in the last ball of the 60th over of the innings. After that, Babar and Naseem progressed slowly, the pair got 24 runs in the first 16 overs. At the end of 84 overs, Pakistan went into the tea break with 194 runs for 9 wickets.

However, it did not take time for Babar to get a century after the tea break. He hit a four off Maheesh Theekshana on the second ball back from the break, which was his tenth four of the innings. A single from the next ball took him to a Century. However, Babar could not stay on the wicket for a long time. Hitting a four and a six in Jayasuriya’s two overs, there was a hint of aggression in his bat.

But in the 91st over, Babar returned to the pavilion getting lbw after being trapped leg before by Theekshana. He could not survive with the reviews. Apart from Jayasuriya, Ramesh Mendis and Maheesh Theekshana picked up 2 wickets for the Lankans. Besides, Kasun Rajitha took 1 wicket.

In the second innings, Lankan captain Dimuth Karunaratne (16) returned to the dressing room after being lbw by Mohammad Nawaz for the team’s 33 runs. However, the hosts did not allow any danger to happen after that. Sri Lanka finished the day 40 runs ahead of the visitors by scoring 36 runs in 11.5 overs. Opener Oshada Fernando is unbeaten on 17 and night watchman Rajitha is unbeaten on 3 runs. 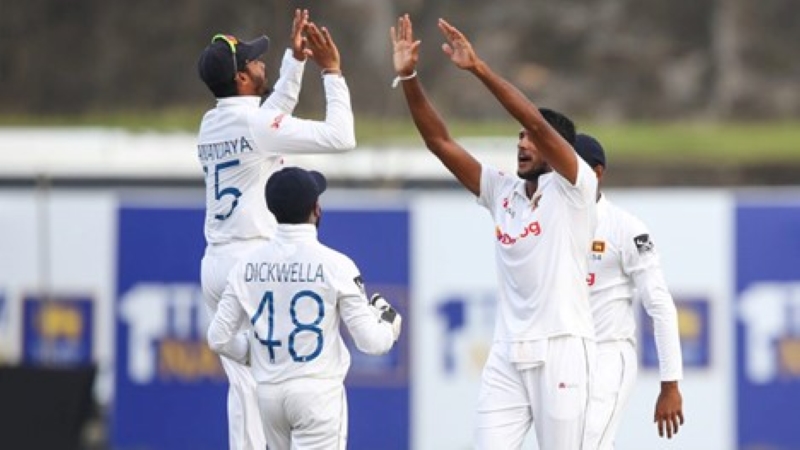