Dravid does not want a century innings from Kohli 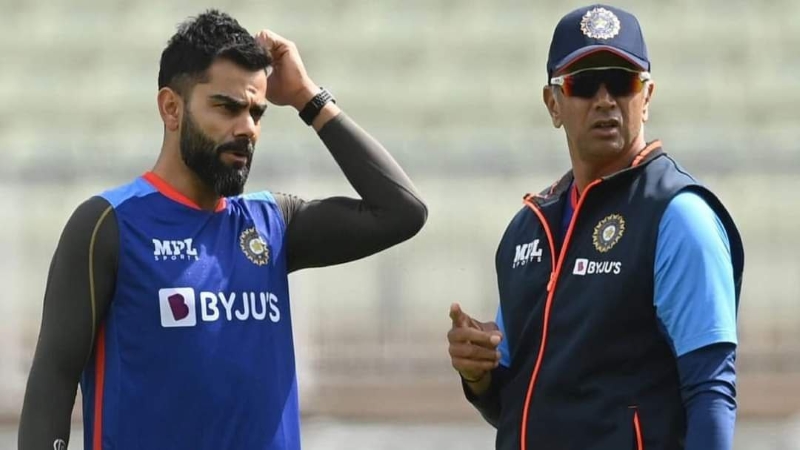 Cover drives, lofted shots, sweep shots, which shots were not played by former India captain Virat Kohli? All the shots were full of aesthetics. The cricket ground is like a canvas, and Kohli was drawing the Mona Lisa with a brush stroke. He has taken himself to unique heights with his performance.

But this time, the poster boy of Indian cricket seems to be looking at the reverse side of the coin. Stay away from the century, it seems difficult to see the flood of runs from Kohli’s willow now. In such a situation, coach Rahul Dravid is standing next to Kohli. He doesn’t want to see a century innings from Kohli.

The Indian cricket team is currently in England to play a Test against England. Head coach Dravid feels that Kohli has taken himself to such a height that he is now failing to meet the expectations of the fans. The coach does not want to see a century innings from Kohli at such a difficult time. Dravid is happy if he playes 50/60 run innings.

Dravid told the media, “He has taken himself to such a place that everyone expects hundreds from him. That has become the measure of his success. As a coach, I would like to say that he wants to make an important contribution to the team. It could be an innings of 50 or 60 runs. Bad times can come to a player.

In the case of Kohli, I can say that he has no desire or enthusiasm to play well. It is not mandatory that he has to score three figures all the time. An innings of 60 runs on a solid wicket is also very valuable. I can talk about the Cape Town Test. Even though he didn’t get a hundred there, he batted well. “

Dravid added, “Kohli still has time . Impossibly fit cricketer. The mentality is also great. I have never seen anyone work like him. Think about his game all the time. Isolation is never seen in preparation. Played the perfect innings against Leicestershire in that environment. Every ball is played in the middle of the bat.”