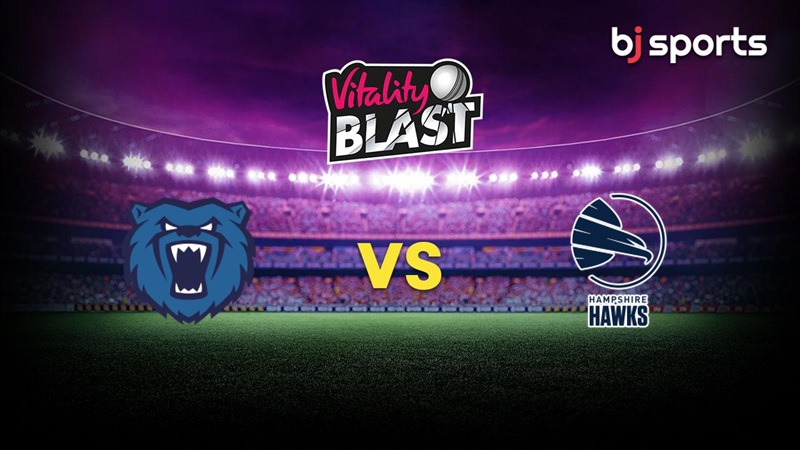 On Thursday night at Edgbaston, the Birmingham Bears and Hampshire Hawks will square off in the second quarterfinal of the 2022 T20 Blast. The Hampshire Hawks ended in the fourth position in the South Group, while the Bears took first place in the North Group. Birmingham kicks off the game at 18:30 local time.

This year, Hampshire Hawks have dramatically improved their T20 Blast campaign. They have a lot of momentum and confidence going into this game.

On July 7, there would be a modest cloud cover over Birmingham.

Keeping scores is tricky at Edgbaston, which has an excellent batting surface. Both teams would prefer to have a target score in mind for this high-pressure game. Therefore, the team that wins the toss in this match will decide to bowl first without hesitation.

There are lots of runs at Edgbaston, as we saw in the Test Match earlier this week. A genuine pitch with lots of pace and bounce is what we anticipate.

The Bears, who finished first in the North Group with a superior run-rate than Lancashire Lightning and Derbyshire Falcons on 18 points, have been in outstanding form. They do not suffer from international call-ups and have a solid team.

Toby Albert, a 20-year-old batsman, was reinserted into the lineup for the last group-stage match against the Sussex Sharks in place of the Australian bowler Nathan Ellis. We anticipate Ellis returning in the starting XI for this quarterfinal since Warwickshire is an excellent batting team.

Birmingham Bears are the favourites to win this match.

When two form sides face-off, you are typically in for a high-calibre match with certain team players. In this game, two scores over 200 are possible, and the best batters are predicted to have some sizable individual innings. We are betting on Warwickshire to prevail in this quarterfinal match overall.