India and Bangladesh met in the 2nd match of the three-match ODI series yesterday at the Sher-e-Bangla National Stadium. Batting first in that match, Bangladesh set a huge target. But India could not reach the target as the scheduled 50 overs ended. As a result, they had to leave the field after losing the series. On the other hand, Bangladesh is dreaming of whitewashing India in the series itself. Besides, Mehidy Hasan Miraz won the man of the match title again due to his excellent batting and good bowling.

Luck once again helped Bangladesh in this very important match at Mirpur Stadium. Captain Liton Das won the toss and decided to bat. The Indian bowlers cornered them when they came to bat, they lost 6 wickets at 69 runs. It was not even 19 overs then. There was darkness in the sky of Bangladesh. It was impossible to turn around from this place. Maybe no one could think. But Mahmudullah Riyad and Mehidy Hasan Miraz thought. This couple showed the team the way of light after overcoming the darkness. Standing in the rubble, Bangladesh got a challenging collection of 271 runs for 7 wickets in their fighting pair.

Enamul Haque Bijoy opened with Liton. They started well. But that good did not last long. Bijoy who scored 11 runs off 9 balls and 2 boundaries wasted his second life. He left the field after falling into the LBW trap. After Enamul Haque, Liton Das was also shown the way to the dressing room by Mohammad Siraj. The Bangladesh captain got bowled by this Indian pacer (7 off 23 balls).

In the 12th over of the innings, Umran Malik stormed the pace with the ball in hand. Shakib Al Hasan had to get a lot of speed to handle him. The world’s best all-rounder was defeated several times in one over. However, Shakib did not get out even though he gave the over a maiden. Nazmul Hossain came to bat after one over and Umran did not delay picking up the wicket. The left-handed batsman scored 21 runs in 3 boundaries off 35 balls. After that, Shakib could not last long. The innings of this experienced batsman stopped at 8 runs from 20 balls.

After that, Washington Sundar picked up a pair of wickets in one over. Mushfiq and Afif. 12 runs came from Mushfiqur’s bat in 2 boundaries off 24 balls, and Afif Hossain (0). 6 wickets lost at 69 runs. Big shame was waiting for Bangladesh. However, the experienced Mahmudullah Riyad and the hero of the previous match, Mehidy Hasan Miraz, saved the team with an incredible fighting standing.

Miraz scored his first career century. He scored 100 runs off 83 balls with 8 fours and 4 sixes. Mahmudullah’s half-century was the 27th of his ODI career. Scored 77 runs off 96 balls with the help of 7 fours. They made a pair of 148 runs on 165 balls for the seventh wicket. Besides, Nasum Ahmed was unbeaten on 18 runs.

Washington Sundar was the most successful Indian bowler. He took 3 wickets for 37 runs. Umran Malik and Mohammad Siraj took two wickets each.

Indians were on the back foot from the start to respond. Ebadot Hossain bowled Virat Kohli. He scored 5 runs off 6 balls. Shikhar Dhawan also got out after scoring 8 runs off 10 balls. After 39 runs, Washington Sundar (11), and Lokesh Rahul (14) also got out. Shreyas Iyer and Axar Patel took the lead when the Indians were reeling at the loss of 4 wickets for 65 runs. They made an impeccable pair of 107 runs.

At this time, Mehidy Hasan Miraz again played the role of the savior. Shreyas Iyer got caught out. His innings of 82 runs off 102 balls ended with the team’s 172 runs. After that, Axar Patel was also dismissed by Ebadot Hossain. He scored 56 runs off 56 balls.

After that, Shardul Thakur scored 7 runs and Deepak Chahar got out after scoring 11 runs. At this time, Rohit Sharma entered the field. He started his stormy batting. A 28-ball half-century testifies to that. He batted the entire T20. But he could not beat the team as the over ended. Besides, Mohammad Siraj got out after playing 12 balls for 2 runs. In the end, they stopped at 266 runs with 19 runs extra. 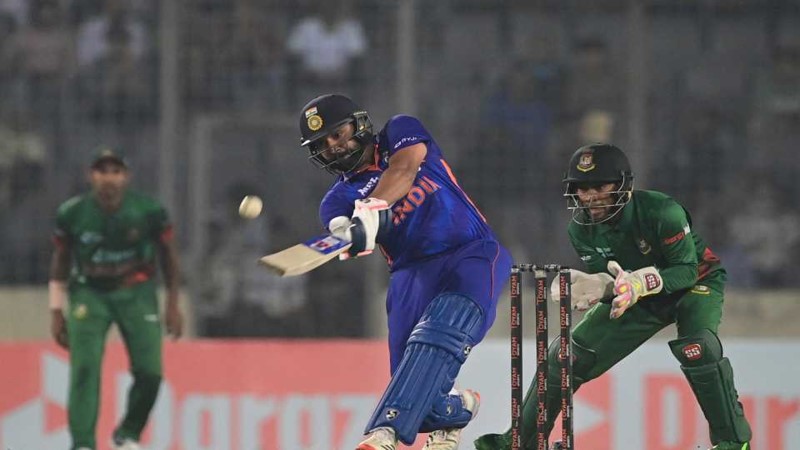