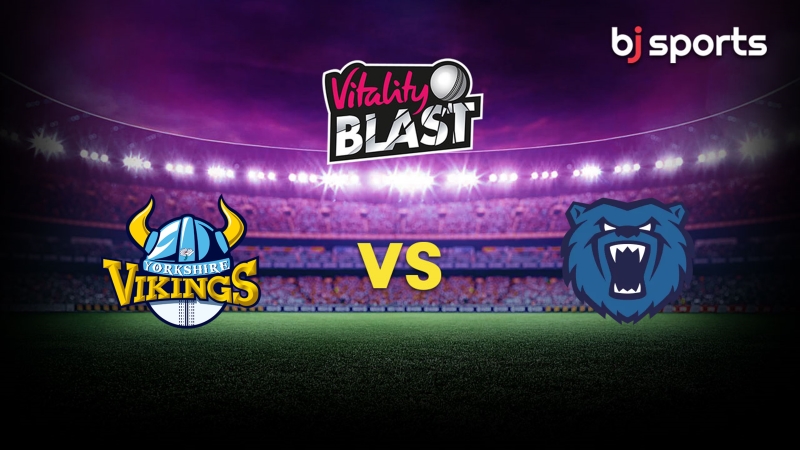 In the 2022 Vitality Blast, Yorkshire Vikings will face Birmingham Bears. On Friday, July 1st, the game will begin at 18:30 local time in Headinley, Leeds.

Yorkshire Vikings are fourth in the North Group, but they are only one point behind the three teams ahead of them. This season, they have won seven games, lost four, and tied one. Last Friday, the Vikings defeated the Steelbacks in Northampton. The Steelbacks were one point ahead of the Vikings going into the game, but Yorkshire won by 62 runs. Harry Brook, an England hopeful, scored 67 runs off 31 balls and was well supported by David Willey, Jordan Thompson, and Matthew Waite in the lower order. Waite took 3-18 with the ball, with Willey, Shadab Khan, and Dom Bess each taking two wickets.

Birmingham Bears currently lead the North Group table. They have 16 points from 12 games, but their participation in the knockout stage is still uncertain because they are only two points ahead of fifth-placed Northamptonshire Steelbacks. After a sloppy start against Worcestershire Rapids last week, the Bears have won three of their last four Blast games and have been completely dominant. Adam Hose hit 110 not out from 53 balls before spinner Danny Briggs claimed 4-25 and the Rapids were dismissed for 84. At Edgbaston, the Bears’ Ollie Stone and Jake Lintott each took two wickets.

The weather in Headingley, Leeds, will be partly cloudy on July 1st, with an 89 percent chance of rain on match day. The maximum and minimum temperatures will be between 13°C and -18°C.

This stadium is primarily used for domestic events such as the Vitality Blast, County Championship, and Royal One Day Cup. The pitch is favorable to bowlers, and it is simple to defend the targets on this ground. The team that wins the toss will want to bat first at this location.

The game will take place in Headingley, Leeds. To find a T20 Blast season in Leeds where the average first innings score was less than 150, you must go back to 2013. On this surface, expect to see a lot of attacking shots and runs.

Yorkshire Vikings’ batting unit will be led by Adam Lyth, David Wiley, and Harry Brook. This team’s inability to establish a batting partnership will be a source of concern. Yorkshire’s bowling attack will be led by Matthew Waite. Dom Bess will spearhead this bowling unit’s spin attack.

Adam Hose and Dan Mousely are in good batting shape and are expected to lead the Birmingham Bears’ batting attack. Inconsistent middle-order batting performances have been a weakness for this team throughout the tournament. Danny Briggs and Olly Stone’s bowling spells will be crucial if the Bears are to win this match.

Birmingham Bears are the favorites to win this match.

This should be an exciting match between two of the best teams in the North Group. With both teams vying for first place but not guaranteed a spot in the top four at the end of the group stage, every ball will be crucial. We anticipate a high-scoring game, with Birmingham Bears coming out on top.