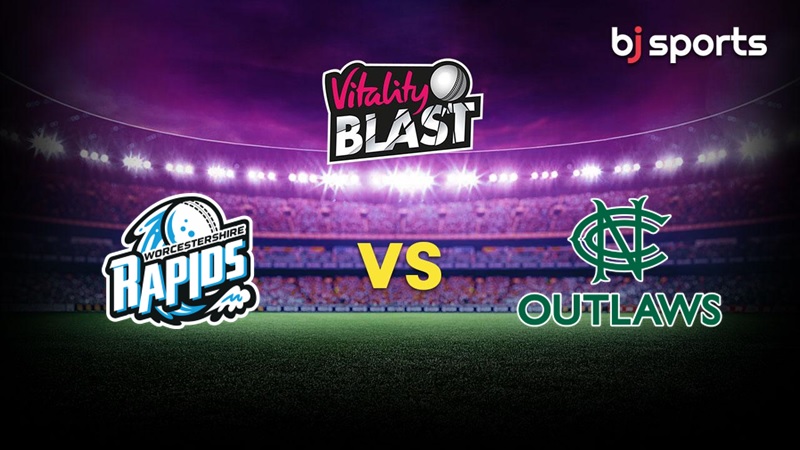 In the 2022 Vitality Blast, Worcestershire Rapids and Notts Outlaws will square off. The match will begin on Sunday, July 3 at 14:30 local time at New Road in Worcester.

Notts Outlaws is on the seventh rank in the points table with 13 points after 6 victories and 6 losses.

In contrast, Worcestershire has dropped 10 of its first 13 games. With only 5 points from 2 victories, they are in last place in the standings. Worcestershire is having a terrible season this year and has no chance of moving on to the knockout round. When they clash in Worcester on Sunday, they’ll now try to contain their hot-hand Notts Outlaws opponents.

On the day of the game, there will be clouds and a 40 to 50 percent chance of rain. The temperature ranges from the maximum to minimum will be 20°C to 9°C.

The team that chose to bowl first in this situation performed superior to the batting team. Whichever side wins the toss will prefer to bowl first and chase at this venue.

The game will take place in Worcester’s New Road. In all but one of the previous six seasons on this pitch, the first innings average score was in the 170s. On this surface, spin bowlers typically have the most success.

In their 14th game of the year, Worcestershire will play Nottinghamshire at Worcester. They are already out of the running to make the playoffs, so they will now strive to eliminate other teams’ chances in that race. This season, they have dropped 10 of their games.

Notts Outlaws beat Worcestershire in their opening game of the season, but they haven’t been able to maintain that momentum throughout the league. They have had success in recent games after mounting a remarkable comeback, winning three straight games to keep up their push for the playoffs.

Notts Outlaws are the favourites to win this match.

Nobody anticipated Worcestershire Rapids’ victory over Lancashire Lightning on Friday night, so we shouldn’t consider another home victory this time. But Notts Outlaws have been playing well recently, and we believe they have the talent and form to win this match.