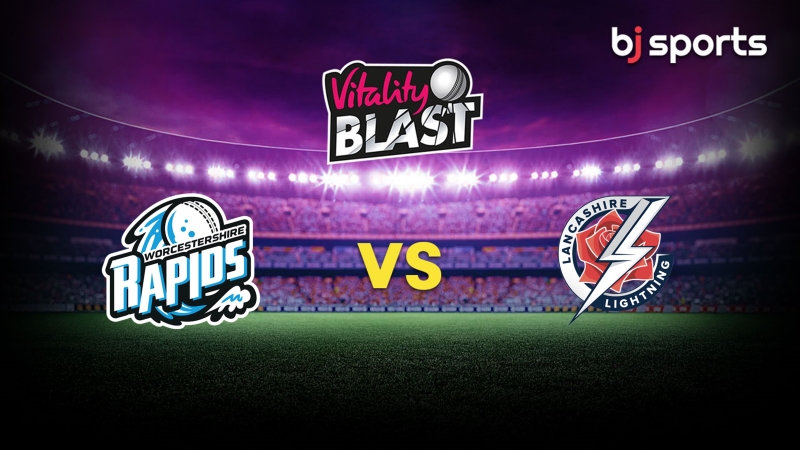 In the 2022 Vitality Blast, Worcestershire Rapids and Lancashire Lightning will square off. On Friday, July 1st, the match will begin at 17:30 local time at New Road in Worcester.

The tournament has been exceedingly upsetting for Worcestershire Rapids, but their loss against Birmingham Bears last Friday at Edgbaston brought them to a new low. The Rapids made some early strides after winning the toss and deciding to field, and they had the Bears at 3-2 in the opening over. All bowlers were costly, though, as the home team rebounded to score a massive 228-8. Despite Colin Munro scoring 34 runs off of just 28 balls and captain Moeen Ali scoring 17 runs off of just 18, the opposition only managed 84 runs before being bowled out.

Although they had led the North Group for the majority of this season, Lancashire Lightning have faltered recently. They are currently tied for second position with the Birmingham Bears, who are in first place, and the Derbyshire Falcons, who are in third place, with Northamptonshire Steelback in fifth place, trailing them by just two points. Lightning lost by a score of 0 runs at Derbyshire Falcons on Friday after losing by a score of 5 runs to Durham at home the previous Thursday. As the Falcons made 188-8 and Lancashire failed to surpass the target, Richard Gleeson recorded 3-45. All three players—Luke Wells, Steven Croft, and Tim David—made scores in the 40s, but none were able to provide the necessary contribution.

On July 1, the weather in Worchester is forecast to be clear, and favorable batting conditions are anticipated.

Three of the four games that have been played here have been won by teams batting first due to the favorable batting surface. At the beginning of the game, the surface would be favorable for batting. In this game, the team that wins the toss will probably choose to bat first.

The game will take place in Worcester’s New Road. The first innings score on this pitch has been 174 on average so far in the 2022 Vitality Blast. This bowling surface should turn for spinners.

Although Moeen Ali is back in charge of the team, he was unable to reverse the team’s recent results. They lost against the Birmingham Bears by 144 runs, and it was a total disaster with the bat and the ball. In this game, Ali and his men would be competing for pride, and they would probably give it everything they had while attempting to earn their second victory of the year.

Dane Vilas would be disappointed to have lost the last match to the Derbyshire Falcons by a score of five runs. In the game’s final over, the team came close to pulling off a significant run chase but was unable to produce. Vilas will want to leave that in the past and perform well in this game. The captain would be hoping for a victory because it would ensure them a spot in the next round.

Lancashire Lightning are the favorites to win this match.

When Worcestershire Rapids lose, you anticipate them to fight back in the following game. However, it did not materialize, as they lost 10 of their 12 games in the competition. We anticipate Lancashire Lightning to be considered too powerful.