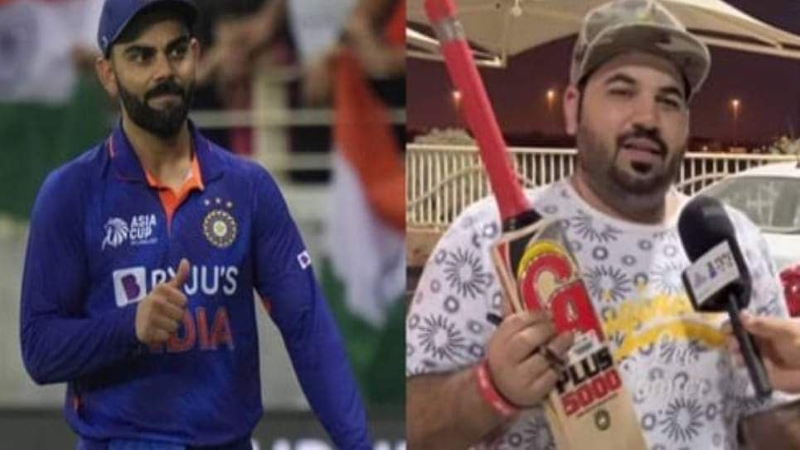 Various crazy activities can be seen from the fans are around the stars. A Pakistani crazy fan of cricket star Virat Kohli has been found.

Kohli was not able to score a century for almost 3 years. King Kohli scored his 71st century against Afghanistan in the Asia Cup. His fans are excited at Kohli’s century after 1020 days. Among which there are Pakistanis.

After the India-Afghanistan match, a Pakistani fan struggled to get Kohli’s autograph at his bat. He is in the headlines with this. He has announced that he will not sell Kohli’s autographed bat even if someone pays crores of rupees. This fan feels very lucky after getting the autograph.

Kohli’s Pakistani fans told reporters, “Kohli bhai autographed this bat in my hand. You can say he gifted it to me. I feel very lucky. I had just one request to Virat bhai. He accepted my request with a smile.”

In response to the reporters whether to sell him the bat or not, the Kohli fan said, “There was a person standing next to me while taking the autograph. I don’t know him. He wanted to buy the bat after Kohli Bhai gave the autograph. He wanted to pay up to 5,000 dirhams (about 100 lakhs in Bangladeshi currency). But I won’t sell this bat. Even if someone pays 500,000 dirhams (more than Rs. 1 crore), I won’t sell this bat. I have got autograph from many people over the last 8-9 years, but this is my best collection. “

Despite the political rivalry between India and Pakistan, friendly behavior was seen between the cricketers of the two countries in the Asia Cup. Kohli is also very popular in Pakistan. Despite being a Pakistani, the fan’s passion for Kohli has touched the hearts of the netizens. Cricket seems to have forgotten the India-Pakistan rivalry and have become united.