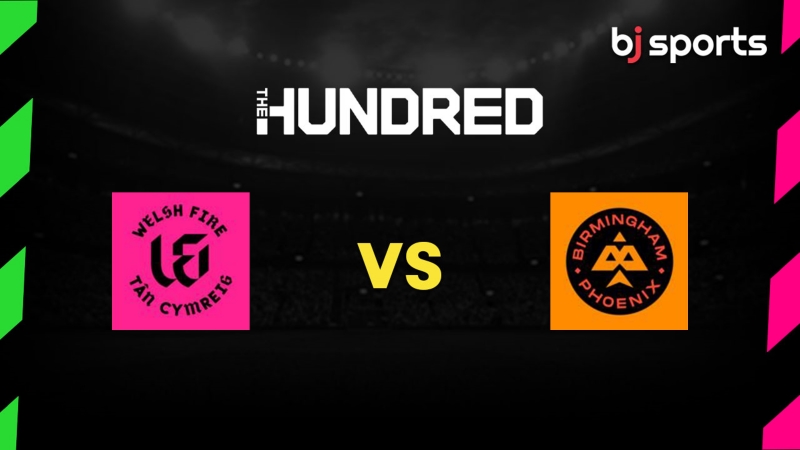 Welsh Fire and Birmingham Phoenix will square off in game 12 of the 2022 Men’s Hundred on Saturday night at Sophia Gardens in Cardiff. So far in this year’s competition, the hosts have played two games and lost two of them. Birmingham Phoenix’s first game ended in a loss to Trent Rockets, however, they recently defeated Southern Brave. At 18:00 local time, the game begins.

Welsh Fire’s leadership and experience continue to be a touch lacking. They have some promising young batters, but if they want to compete in this kind of game, they must mature soon.

Birmingham Phoenix’s victory over Southern Brave earlier this week served as a warning to the rest of the competition. Will Smeed announced his arrival to the cricketing community at the same moment. Phoenix will enter this encounter with a lot of confidence.

Prior to each game this season, every captain with the exception of Eoin Morgan made the decision to field first. In this match, we anticipate that both teams will want to bowl first.

Since the surface frequently favors spin and pace bowlers, this is seldom the easiest location to bat. A par score of no more than 150 is anticipated.

After completing his international duties, South African power hitter David Miller was selected for the Welsh Fire XI to face the Oval Invincibles in place of Noor Ahmad. Sam Hain was likewise replaced by George Scrimshaw. Despite being on England Lions duty this week, Ben Duckett is still expected to participate in this game.

After losing to Trent Rockets to start the season, Moeen Ali will have been pleased to see his team upset Southern Brave. For the victory, Graeme van Beuren and Dan Mousley were replaced by Matthew Wade and Henry Brooks.

Birmingham Phoenix is the favorite to win this match.

As Ben Duckett showed for England Lions, there is plenty of batting talent in the Welsh Fire squad and at some point, they will produce a very strong batting performance. However, we do not think they will be able to cope with the form of Birmingham Phoenix. We are predicting another defeat for Welsh Fire and a second win of the campaign for Birmingham Phoenix.