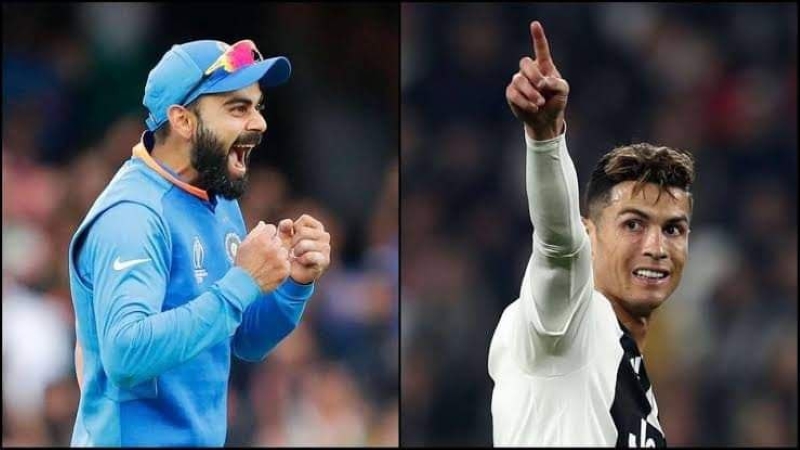 Cristiano Ronaldo is one of the best football players of all time. He also sets one record after another. But this time the Portuguese star has reached a different milestone. Ronaldo completed 700 goals in his club career with a goal against Everton on Sunday.

And former Indian captain Virat Kohli congratulated him. Indian cricket star not only congratulated Ronaldo, but Kohli also called him the best footballer of all time. Various posts of Kohli have revealed that he is a huge fan of Ronaldo.

After the match against Everton, Ronaldo his official Instagram account shared a picture of himself celebrating his goal with fans.

The caption of the picture reads, ‘Great win guys! Another step in the right direction!’ Ronaldo’s post has been flooded with wishes from his fans and supporters. In the comments of that post, Kohli wrote, ‘GOAT’. The full form of which stands, ‘Greatest of All Time’ or ‘Best of all time’. It is clear that Ronaldo is the best in Kohli’s eyes.

But this is not the first time, Kohli has commented on Ronaldo’s various posts before. The two were even seen in an advertisement for a local company. But not at the same time, both of them shot separately. That is why these two megastars of two worlds did not meet.

Meanwhile, Kohli is currently in a good rhythm. After a long wait of three years, he recently scored a century in the Asia Cup. And that’s why Kohli, who scored 71 centuries, raised the possibility of breaking Sachin Tendulkar’s record of 100 centuries. Currently, this right-handed batsman is staying in Australia to play T20 World Cup.