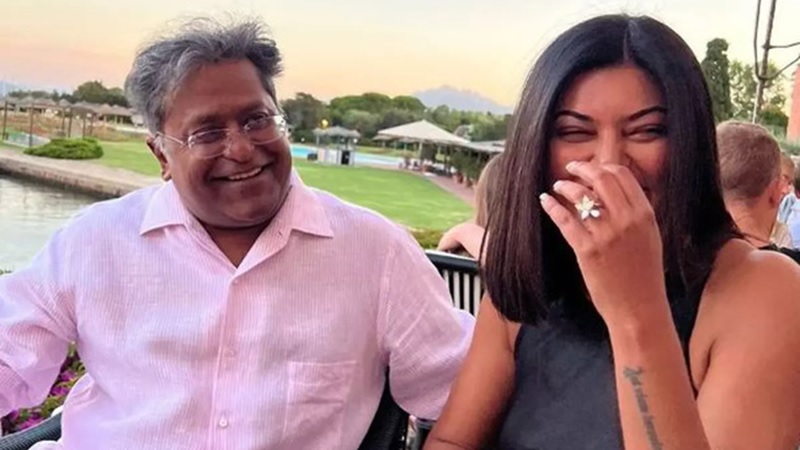 Cricket and Bollywood love stories are not new. Bollywood actresses have been rumoured to be dating many Indian cricketers from time to time. Couples like Kohli-Anushka Sharma have started their marital life after getting married. Sourav-Nagma, Dhoni-Deepika Padukone, and Yuvraj-Deepika’s love rumours were once widely talked about in the media. Once again, Bollywood and Cricket are tied together.

Lalit Modi, the founder of the Indian Premier League (IPL), suddenly came into the discussion. He created a stir on social media by declaring his love for Indian actress Sushmita Sen on Twitter. For netizens, Lalit – Sushmita has become a matter of discussion.

Lalit’s initial tweet was, however, quite cryptic. He shared a photo of the two of them and wrote, ‘I came to London after visiting Sardinia with my family. Not to mention my better half Sushmita Sen. Finally, the beginning of a new life. I feel like I have gone up to the moon.’

The ‘better half’ of that tweet created a buzz. It is being discussed, have the two completed the marriage? But after a while, Lalit dismissed the rumours in another tweet and said he was not married yet. But I will do it soon. In the tweet, he wrote, ‘New life has begun, but we are not married, we are only in love. But marriage will happen one day.’

Lalit was accused of embezzling money after two seasons of the IPL’s establishment. The investigation started against him in 2010 when Lalit left India and moved to London. Since then, Lalit, who settled in London, has not returned to the country till now.

Meanwhile, Sushmita is far ahead of Lalit in terms of popularity. Sushmita, who won the title of Miss World in 1994, entered the world of cinema in 1996. This actress made a place in the audience’s hearts by acting in many great movies. Let’s see if Lalit Sushmita’s love is fulfilled in the end!