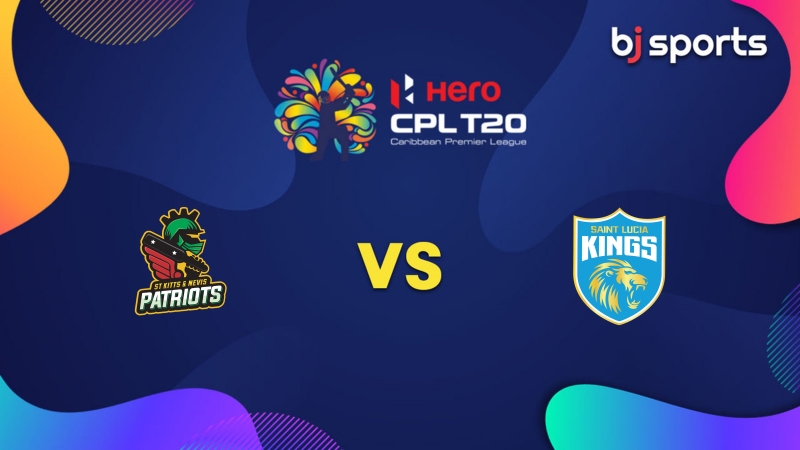 St. Kitts & Nevis Patriots and Saint Lucia Kings will square off in game 20 of the 2022 Caribbean Premier League on Saturday morning at Tarouba’s Brian Lara Cricket Academy. The Patriots are in third place with six points after seven games. From six games, the Kings have four points. Ten o’clock local time marks the start of the game.

In their last three games, St. Kitts and Nevis Patriots have defeated Guyana Amazon Warriors and Jamaica Tallawahs, but they also suffered a significant loss to Saint Lucia Kings. In this fight, they’ll be eager for retribution.

With a 61-run victory over the Patriots in their most recent game, the Saint Lucia Kings returned to winning ways, and they will be pumped up for this encounter.

Early on, it’s very overcast and humid, but the humidity will decrease as the game goes on. By the time the game is through, the temperature should be 28 degrees.

Even though this is a new field, we anticipate the captains to want to keep chasing a total in the second innings of the match. According to our projection, if they win the toss, both captains are likely to choose to field first.

This venue provided a surface that benefited spin bowlers when it hosted an IT20 earlier this summer. There will be plenty for speedy bowlers as well, and a par score of between 160 and 165 is what we anticipate.

As anticipated, captain Dwayne Bravo rejoined the team after missing the six-wicket loss to the Guyana Amazon Warriors due to a minor injury. The skipper replaced Sheldon Cottrell, whom we anticipate will return to replace the pricey Jaden Carmichael.

We anticipate Saint Lucia Kings to stick with the same starting lineup for this game after their great margin of victory against the same opposition in their previous game. Injuries or player availability difficulties have not arisen recently before this match at Tarouba.

Saint Lucia Kings are the favourites to win this match.

This should be an exciting fight between two teams whom we expect to be extremely closely matched. The Kings want to win three straights, while the Patriots are going for their third victory in four games. We are betting on the Kings to win this match, although they will start the game below the Patriots in the standings.