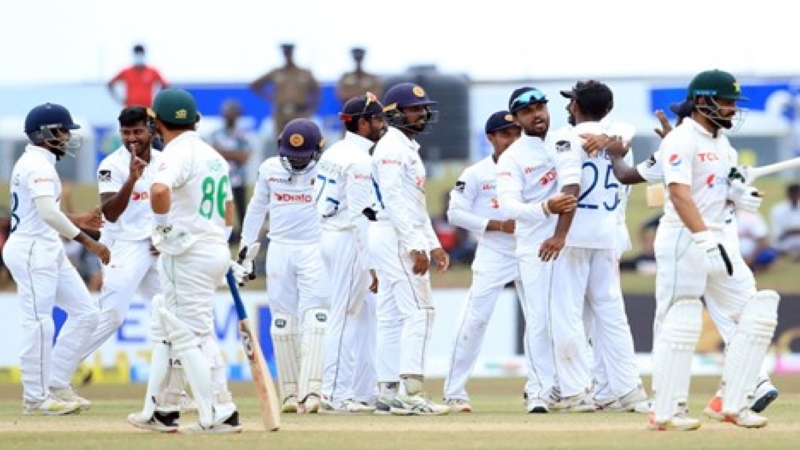 An impossible target of 508 runs was ahead of Pakistan. They had to make history to win the game. However, despite the impossibility of victory, the visitors were dreaming of a draw due to the tenacity of the top order in the Galle Test.

When play started on the fifth day, Pakistan needed 419 runs, and the Lankans needed 9 wickets to win. However, the chances of Pakistan winning this match were quite low. Because the world record for the run chase in Test history is 418 runs.

However, rain or steady batting by Babar Azam was the only possibility to draw this match. But Prabath Jayasuriya and Ramesh Mendis did not let that happen. Pakistan scored 176 runs for 2 wickets. Babar Azam & Co. were all out after adding 85 more runs from there. Their second innings was halted at 261 runs due to the spin magic of Prabath Jayasuriya and Ramesh Mendis.

As a result, Sri Lanka won by 246 runs. Pakistan won the first Test of the series. With this victory of the Lankans, the two-match series ended with a 1-1 tie.

Pakistan started the day with 89 runs for 1 wicket. The Sri Lankan bowlers kept the Pakistani batsmen under pressure from the start of the fifth day. Coming to the threshold of the half-century, Imam ul Haq returned to the dressing room at the beginning of the day. He was caught off Ramesh Mendis behind the wicket after scoring 49 runs off 90 balls.

The pair of 55 runs of Imam and Babar got broken through this. After that, Babar and Mohammad Rizwan were handling the third wicket building up a partnership of 79 runs from 141 balls.

But half an hour before the lunch break, the situation changed. Rizwan, who scored 37 runs, was bowled when he left the ball off Jayasuriya. He got bowled by a spinner for the first time in his Test career with this dismissal. After his departure, the visitors lost 3 wickets for just 12 runs and crashed out of the match.

After Rizwan’s return, no one else could stand on the wicket with Babar. Fawad Alam (1) came and got run out while trying to take unnecessary runs. After that, Pakistan could not turn around in the match.

Jayasuriya picked up Babar early in the second session to give Sri Lanka the scent of victory. The Pakistan captain was a victim of LBW after scoring 81 runs off 146 balls. Pakistan made the loss only a matter of time by losing Mohammad Nawaz (12) in the next over after Babar’s departure. Yasir Shah scored 27, Naseem Shah made 18, and Hasan Ali got 11 runs for the team.

Like the previous Test, Lankan spinner Prabath Jayasuriya bowled brilliantly against Pakistan in this Test. This left-arm spinner took 5 wickets for 117 runs in Pakistan’s second innings. Jayasuriya, who came down to play the third Test of his career, also became the highest wicket-taker (17) in this series.

Besides, Ramesh Mendis picked up 4 wickets for 101 runs. Dhananjaya de Silva was adjudged player of the match for his brilliant century in the 2nd innings. Prabath Jayasuriya was selected as the player of the series for taking the highest number of wickets in the series.

Player of the series – Prabath Jayasuriya 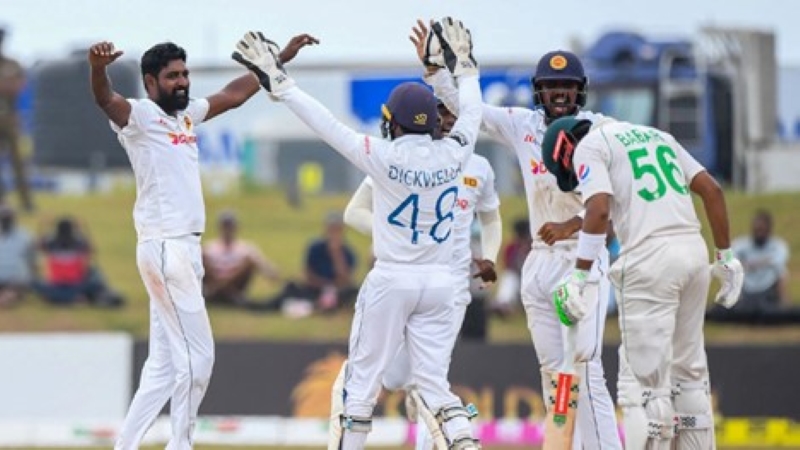