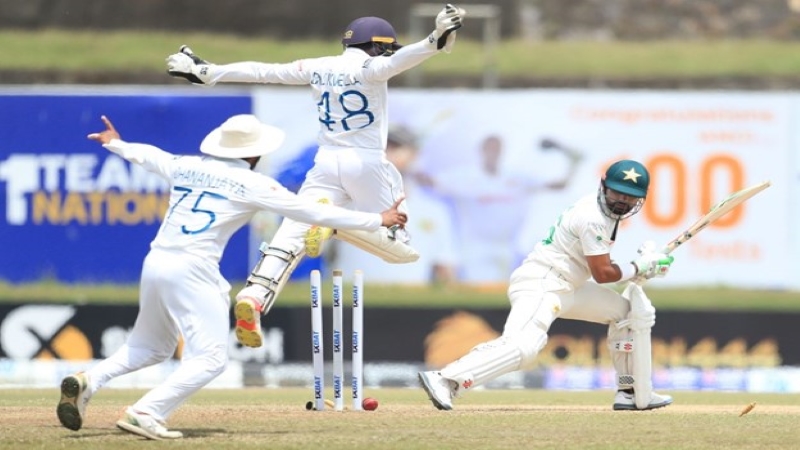 In reply to Sri Lanka’s 378 runs in the first innings, Babar Azam’s team scored 191 for 7 at the end of the second day. They are still trailing by a huge margin of 187 runs, with only 3 wickets in hand.

Pakistani Bowlers Yasir Shah and Naseem Shah did not allow the Sri Lankan batsmen to stay on the wicket for long in the second day’s game on Monday (July 25). Starting the second day with 315 runs for 6 wickets, the Lankans were bowled out for 378 runs. Naseem and Yasir shared the last 4 wickets between them.

Naseem gave Pakistan the first breakthrough by picking up the wicket of Dunith Wellalage for 11 runs with a short ball. Niroshan Dickwella also got out with a short delivery, he was caught behind the wicket on the leg side and scored 51 runs.

Despite losing 8 wickets for 333 runs, Sri Lanka reached 378 runs mainly courtesy of Ramesh Mendis. After 20 runs partnership with Prabath Jayasuriya (8) for the ninth wicket, he added another 25 runs with Asitha Fernando (4) for the last wicket. Mendis scored 33 off 52 balls hitting 4 fours and 1 six before being bowled by Yasir.

Naseem and Yasir took the maximum number of 3 wickets each for Pakistan. Apart from this, Mohammad Nawaz took 2 wickets and Nauman Ali took 1 wicket.

In response, the Pakistani batsmen could not take any advantage after coming down to bat. Two spinners Ramesh Mendis and Prabath Jayasuriya’s whirlwind magic have left the Pak batters confused. They scored 191 runs and lost 7 wickets. After trailing by 187 runs on the third day, Pakistan will go into bat again on the third day. Only 3 wickets are left in their innings.

Among Pakistan’s batsmen, Agha Salman was the only one who tried hard to save the team. The all-rounder, who had just come out to play the second Test, scored 62 runs before being dismissed by Jayasuriya. His innings had 4 fours and a six.

At the very beginning of the match today, Pakistan lost the wicket of Abdullah Shafique at the beginning, who was the man of the match of the last match. He got bowled on the second ball he faced. Asitha Fernando got his wicket. Captain Babar Azam could not do anything well when he came to the wicket. Babar, the Century scorer of the previous Test, scored only 16 runs on this day.

On this day, the Pakistani batsmen could not play a big innings despite being set on the wicket. Imamul-Haq got out for 32 runs despite raising hopes. Mohammad Rizwan got out for 20 odd runs and Fawad Alam who came to play in this also scored 20 odd runs. Both became victims of Ramesh Mendis by scoring 24 runs.

Then Mohammad Nawaz departed after scoring 12 runs and Agha Salman made a partnership of 46 runs with Yasir Shah. Both save the team from follow-on. However, Jayasuriya sent Salman back to the pavilion with the fourth ball of the last over of the day. The umpire then declared the end of the day’s play. 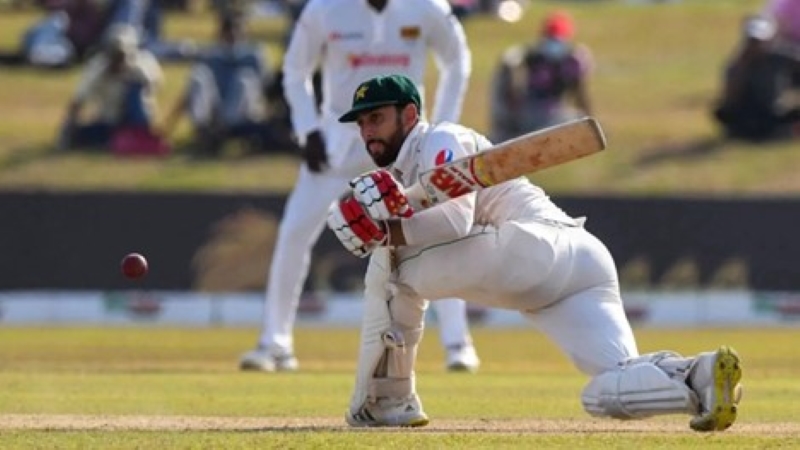