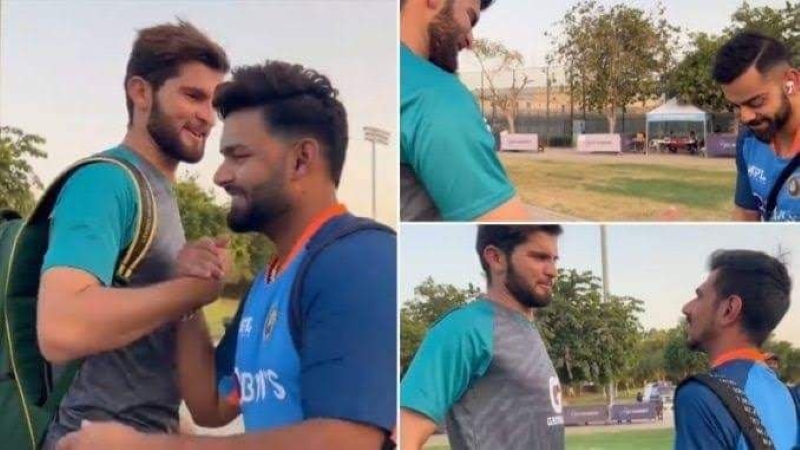 As the time for the India-Pakistan match in the Asia Cup comes closer, the excitement between the fans and supporters of the two teams is increasing. But not this excitement can’t be seen between the players of the two teams. Rather, Shaheen Shah Afridi and Rishabh Pant were seen in a very friendly meeting during the practice session at the ICC Academy ground in Dubai.

Pakistani pacer Shaheen has been ruled out of the Asia Cup due to a knee injury during the tour of Sri Lanka. But he is with the team. When Shaheen met the Indian cricketers, he was sitting on the side of the field with a special ‘support’ on his injured leg.

Meanwhile, Virat Kohli, Rishabh Pant, Yuzvendra Chahal came to see Shaheen on their way back to the hotel after practice. Everyone exchanged greetings and asked about Shaheen’s injury. That video was published on the Internet by the Pakistan Cricket Board.

Shaheen joked with Panth and said, ”Friend, I think I will start batting like you. Will hit six with one hand.” Advising him, the Indian wicketkeeper said, ”Sir, you are a fast bowler. You have to work a little.” After that, Panth wants to know, ”How long will it take to heal your injury?” Shaheen said, ‘Five weeks.’

Note that India and Pakistan will face each other on August 28. This is the first match for both teams in this year’s Asia Cup. The two teams last met in the 2021 T20 World Cup. Pakistan won the match by 10 wickets. Where Shaheen dismissed India’s top three batsmen Rohit Sharma, Lokesh Rahul and Virat Kohli.