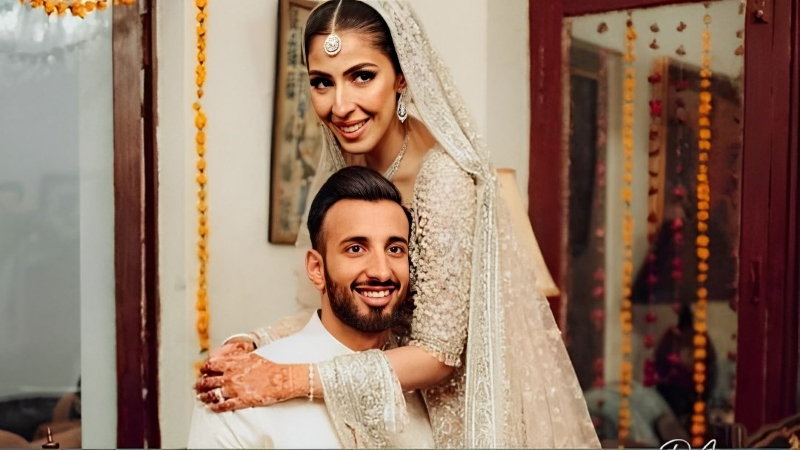 After breaking the hearts of many girls, Pakistan’s top order batsman Shan Masood finally got married. This Pakistani cricketer got married to Nishe Khan in Peshawar last Saturday. Pakistan’s left-handed batsman started the new chapter of his life with much fanfare. He made love with his lover by changing the form of long time love. Shan Masood was seen wearing a white sherwani matching his wife’s dress at the wedding. Pakistan’s former and current star cricketers were present at the wedding.

Cricketers like former Pakistan captain Shahid Afridi, current Pakistan captain Babar Azam, all-rounder Shadab Khan were present at the wedding ceremony. Besides, close friends and relatives were also present at the wedding. This wedding ceremony has been going on for about a week. Finally, on January 21, they joined hands. After the wedding, a post-wedding reception is organized again on January 27 at the groom’s house in Karachi. Close friends and relatives of Pakistani cricketers will also be present there.

Shan Masood was born on October 14, 1989 in Kuwait. The 32-year-old Pakistani cricketer has so far played 27 Tests, 5 ODIs and 19 T20Is in Pakistan’s jersey. Shan Masood was also a member of the Pakistan national team in the 2022 T20 World Cup. This year he also signed a contract in England’s county cricket. Shan Masood signed a two-year contract with Yorkshire. Among the three formats of cricket, he made his Test debut in 2013, but made his debut in the other two formats much later.

He started his international career with a Test against South Africa in 2013. He then made his debut in ODI cricket in 2019 and T20 cricket in 2022. So far he has scored more than 2000 runs in all formats of cricket. Fakhar Zaman’s series of failures in the last Asia Cup and finally getting knocked out by injury opened opportunities for Masud. Finally, he played in T20 World Cup.

The death of his sister had a big impact on Masud’s life. In an interview, he said that his sister’s death changed many aspects of his life. Returning to the team after a long time, he said, “After my sister’s death, my life has changed a lot. I have started seeing things differently. It is definitely important and a matter of pride to be able to play for my country. Cricket is only a part of life, but family is much more important.” Before marriage, Masud said that now he is thinking about cricket. He wants to give many things to the country. Let’s see how much success wife Bhagya brings in Masud’s life after marriage. Many have wished Masood for his new life after marriage.