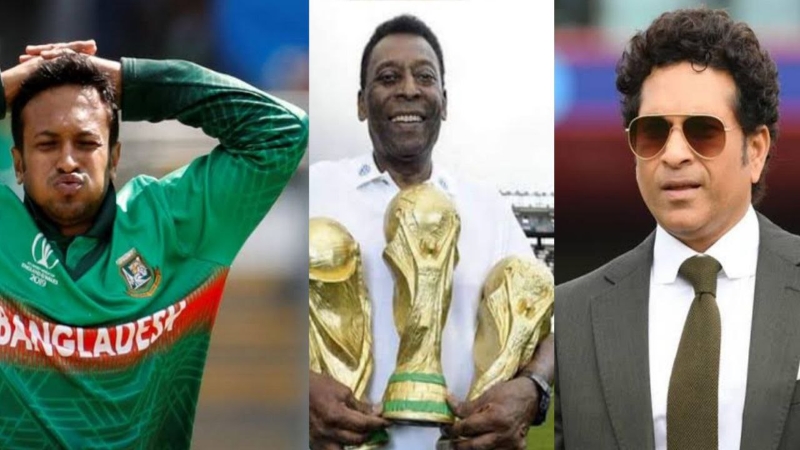 Pele is known as the king of the football world. That king left the kingdom on Thursday night. And that’s why the whole world is mourning. A lamentation for all walks of life, a farewell to a legend. The death of the magical footballer has cast a shadow of mourning in the cricket arena as well. Bangladeshi cricketers were not left out either. Many people, including Shakib Al Hasan, have condoled Pele’s death.

Bangladesh cricket team captain Shakib expressed grief over Pele’s death. The world’s best all-rounder also wished the soul of the Brazilian legend to rest in peace. On his Facebook page, Shakib wrote, “Pele impressed everyone with his talent. Enriched football. Football and Pele will remain synonymous. Rest in peace, legend.”

Meanwhile, Indian legend Sachin Tendulkar is also saddened by Pele’s death. According to him, the passing away of this footballer is a big loss for the entire sports world. He wrote, “Pele’s death is a great loss not only for football but for the entire sports world. There will never be another like this. You will live forever in the world of sports. Rest in peace Pele.”

Apart from the cricketers of Bangladesh and India, many others mourned Pele’s death. It should be noted that this football legend passed away on Thursday at the age of 82. Pele had been undergoing treatment at the Albert Einstein Hospital in Sao Paulo, Brazil since last November for colon cancer, and kidney and heart problems. He died there while undergoing treatment. Pele won 37 World Cups in his 21-year career. Pele is the only player to win the World Cup 3 times in his career. Pele was born on October 23, 1940 in Tres Coracha, Minas Gerais, Brazil.