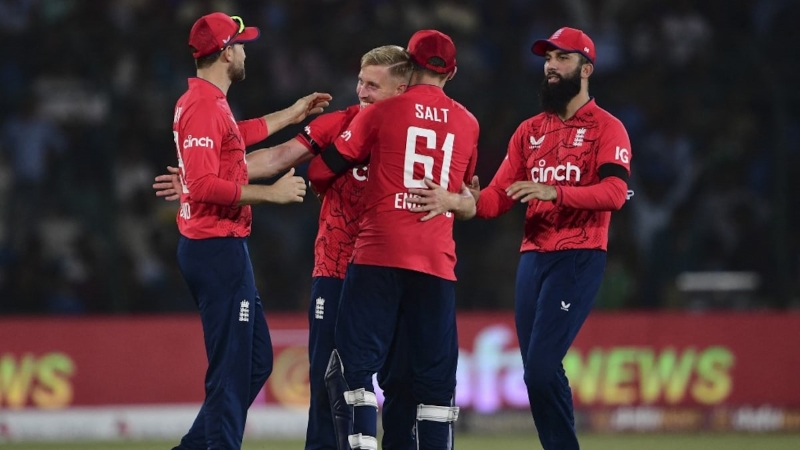 After 17 years, the visiting England had got a win on Pakistan soil. In the first T20I of the seven-match series, the visitors went down to bat in response to the 158 runs target given by the host Pakistan and won by 6 wickets with 4 balls in hand. The anointed Luke Wood was selected as the player of the match after picking up 3 wickets at the cost of 24 runs in 4 overs.

England captain Moeen Ali invited Pakistan to bat first after winning the toss in Karachi. Babar Azam and Mohammad Rizwan gave the team a great start. The Men in Green scored 85 runs off 57 balls in the opening pair.

Babar scored 31 runs off 24 balls before being bowled by Adil Rashid’s googly. Haider Ali, who got a chance in one-down, could not score more than 11 runs facing 13 balls. However, the English bowlers held the hosts well at times. As a result, Pakistan’s middle order lost its rhythm once again.

On the one hand, Mohammad Rizwan kept the innings ongoing, but in the 15th over he was stumped by England captain Moeen Ali and returned to the pavilion after scoring 68 runs off 46 balls. Rizwan’s innings had 6 fours and 2 sixes.

After the departure of Rizwan, the next batsmen could not shine much. Except for Iftikhar Ahmed’s innings of 28 runs off 17 balls, none of the others could make a double-digit score. Shan Masood scored 7 runs in 7 balls in his T20I debut. He was only able to hit Moeen over extra cover for a four. Later he was caught out while trying to play a reverse sweep off Rashid.

Pakistan could not score more than 71 runs in the last 10 overs due to middle-order failure. As a result, the hosts’ innings stopped at 158 runs after losing 7 wickets in the scheduled 20 overs. Apart from Luke Wood, Adil Rashid took 2 wickets conceding 27 runs in 4 overs for England. Besides, Sam Curran and Moeen Ali took 1 wicket each.

Coming down to chase the runs, the new opening pair of Philp Salt and Alex Hales collectively made 19 runs, 10 runs from 10 balls came from the bat of Salt and he was caught by Haider at deep square leg off Shahnawaz Dahani’s ball. However, the speed of runs in the powerplay did not slow down for England, they collected 47 runs after losing one wicket in 6 overs. After that, Usman Qadir sent Dawid Malan back to the pavilion, scoring 20 runs in 15 balls.

England’s next wicket was also picked up by this Pakistani leg spinner. Ben Duckett scored 21 runs off 17 balls and got out with an lbw coming down to play after almost three and a half years in this edition. However, Hales survived with a simple catch at wide long-on by Masood for a personal 28 runs before this.

Hales’ fourth-wicket partnership with Harry Brook brought 55 off 35 balls for the team. Hales completed his fifty off 39 balls by hitting Harris Rauf for a four, where he hit a total of 7 four. However, he returned to the pavilion on the very next ball.

However, the visitors did not have a problem with that. Brook didn’t let that happen. He remained unbeaten on 42 off 25 balls and accompanied by Moeen (9), the Englishman secured the victory with 4 balls to spare. England is touring Pakistan after 17 years and they’ve made the first match so memorable that it will be special for Hales-Wood as well.

For Pakistan, Usman Qadir took the maximum number of 2 wickets and Haris Rauf and Shahnawaz Dahani took 1 wicket each. The two teams will face each other in the 2nd match of the series on Thursday (September 22) at the same venue and time.

Player of the match – Luke Wood 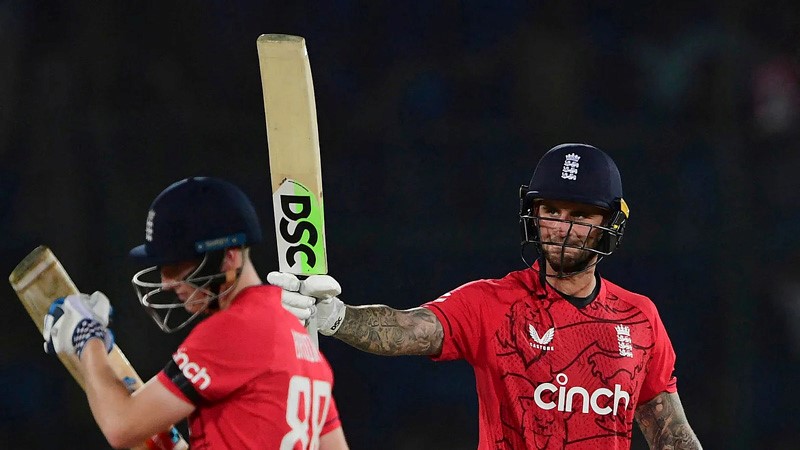