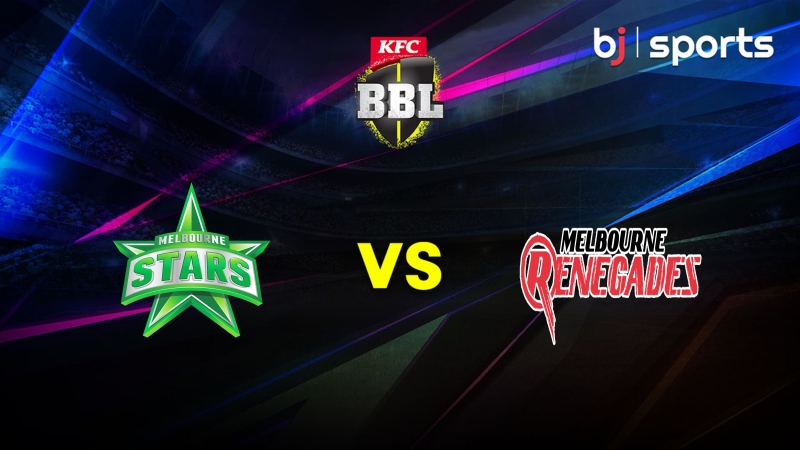 Tuesday night at the Melbourne Cricket Ground is Big Bash League Match 27 between the Melbourne Stars and Melbourne Renegades. On New Year’s Eve, the Stars defeated the Adelaide Strikers by an eight-run margin. The Renegades have dropped their past four games into this Melbourne derby. On January 3rd, at 19:15 local time, the game begins.

Melbourne Stars returned to winning ways in Adelaide with a fantastic team performance. They will be buoyed by that victory and believe they have a good chance of winning this local rivalry.

The Melbourne Renegades are currently on a losing streak and have suffered significant defeats recently. If they want to compete in this match, they will need to significantly improve.

Light clouds are predicted in the weather for the game.

In order to bat first and score a respectable total in their allotted 20 overs, both teams will be eager to win the toss. The side that batted first won the last two BBL games held at the MCG.

In the first set of Power play overs, the MCG’s wicket will undoubtedly aid the pace bowlers.

Although Glenn Maxwell and Joe Burns continue to miss significant amounts of time, the Melbourne Stars club is otherwise injury-free. The starting lineup from the victory over the Strikers is likely to remain the same for this game.

Although he has been managing a little ailment, Kane Richardson was able to perform well on New Year’s Day, and we anticipate that he will be chosen once more for this game. Peter Handscomb could very probably start as the opener in this game after being moved up to number three in the batting order in the previous contest.

Melbourne Stars is the favourite to win this match.

There will always be more tension and intrigue in a game when two teams from the same city compete against one another. The Stars and the Renegades both need to win, so this game will be no different. The Renegades started the season strong, but they have since had trouble supporting Aaron Finch, who has been their lone reliable performer lately. We anticipate Melbourne Stars to triumph.