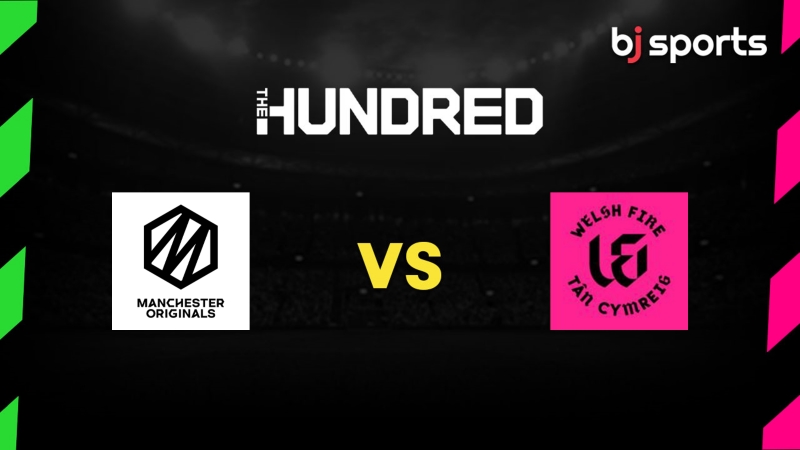 This match between Manchester Originals and Welsh Fire at the Emirates Old Trafford has extra significance because both teams had lost three straight games in the competition. Due to having a slightly higher net run rate than Welsh Fire, The Originals are currently in front of them.  At 18:30 local time, the game begins.

In their most recent game, Manchester Originals displayed great batting, but their bowling was unable to get rid of Dawid Malan. They will be able to compete in this match if they can achieve another high total.

Welsh Fire will be as disappointed as they were after their previous losses, despite the fact that they only lost by four runs. For this side, losing is a habit that is difficult to break.

On August 16, rain is expected in Manchester; if we were lucky, the game would be finished.

In both of the games that have been played here, the team chasing the score has recorded sizable victories. Setting a score and defending it are really difficult tasks here. At the toss, both captains will be considering this. In this game, the team that wins the toss will probably select fielding first.

As we’ve already seen, the surface is favorable for batting and allows batsmen to execute their strokes with ease. In this game, the team that bats first would be content with a score of 170 runs.

The Originals chose the same XI for a closer loss to Trent Rockets despite a 52-run loss to London Spirit last Monday. We anticipate the same XI to be chosen, assuming there are no injuries in the camp, which we currently feel there aren’t.

Ollie Pope and Ryan Higgins were both benched prior to the match against Birmingham Phoenix. Pope, as Higgins appeared to be resting after taking two wickets against Oval Invincibles, due to England’s next Test match against South Africa. We appreciate how the bowling attack from the last game looks and don’t anticipate any adjustments.

Manchester Originals are the favorites to win this match.

Losing streaks always end eventually, and if the weather interferes, this game will do the same for both of these sides! Welsh Fire came within five runs of victory in their most recent game, but we anticipate Manchester Originals to prevail and be the stronger team in this one.