The match was reduced to 40 overs due to rain. Batting first after losing the toss in that match, the visiting South Africa got a huge capital of 249 runs. In reply, Shreyas Iyer’s half-century and Sanju Samson’s unbeaten innings of 86 runs could not bring a win for the host India in the end. As a result, the Proteas have taken a 1-0 lead in the three-match ODI series by securing a great victory by 9 runs.

India needed 30 runs from the last over to win the first ODI against the visitors. Samson alone scored 19 runs with one six, three fours, and a wide. India scored 20 runs in the last over and eventually lost by 9 runs, but Samson has to be praised for fighting well. South Africa added 10 more points to the World Cup Super League scoreboard with this victory.

South Africa avoided being whitewashed by winning the last T20I match. The visiting Proteas maintained that consistency in the ODI series as well. Winning the toss, India sent South Africa to bat first.

After the scheduled 40 overs with the bats of Heinrich Klaasen and David Miller, South Africa’s score stood at 249 with the loss of 4 wickets. David Miller remained unbeaten with blistering innings of 75 runs from 63 balls with 5 fours and 3 sixes. Besides, Heinrich Klaasen played a devastating inning of 74 runs off 65 balls. Where his innings were studded with 6 fours and 2 sixes.

Chasing a challenging target of 250 runs, the Men in Blues did not get off to a good start. Without Virat Kohli, Rohit Sharma, the first four batsmen in India’s top order, went back to the dressing room after scoring 51 runs. Shikhar Dhawan (4 off 16), Shubman Gill (3 off 7), and Ruturaj Gaikwad (19 off 42) could not stay on the wicket for long.

Ishan Kishan, who came down at number four, also returned to the dressing room with 20 runs off 37 balls. However, India survived the match till the last over with two good pairs of Samson, who was down for six. Samson made a 67-run partnership playing 52 deliveries with Shreyas Iyer for the fifth wicket. Samson paired with Shardul Thakur after Iyer, who scored 50 runs off 37 balls and was dismissed in the 27th. Samson’s contribution to their 66-ball 93-run partnership was 52 runs off 35 balls.

Shardul, who scored 33 runs off 31 balls, kept only one end safe; Samson led the primary battle. India was optimistic about winning despite being 46 runs short of the last three overs to win. But after Protea pacer Lungi Ngidi picked up Shardul and Kuldeep in two consecutive balls in the 38th over, India had to face a defeat in the match.

Samson couldn’t bring victory to India despite making a pair of 25 runs from 8 balls with Ravi Bishnoi on the last wicket. In the end, India scored 240 runs after losing 8 wickets. Samson was unbeaten with 86 runs off 63 balls, smashing 3 sixes and 9 fours.

Lungi Ngidi took the highest number of 3 wickets for South Africa, and Kagiso Rabada took 2 wickets. Besides, Keshav Maharaj, Wayne Parnell, and Tabraiz Shamsi took 1 wicket each. Heinrich Klaasen was adjudged player of the match after playing a daring inning.

The two teams will meet in the second match of the series next Sunday (October 9) at the JSCA International Stadium Complex in Ranchi.

Player of the match – Heinrich Klaasen 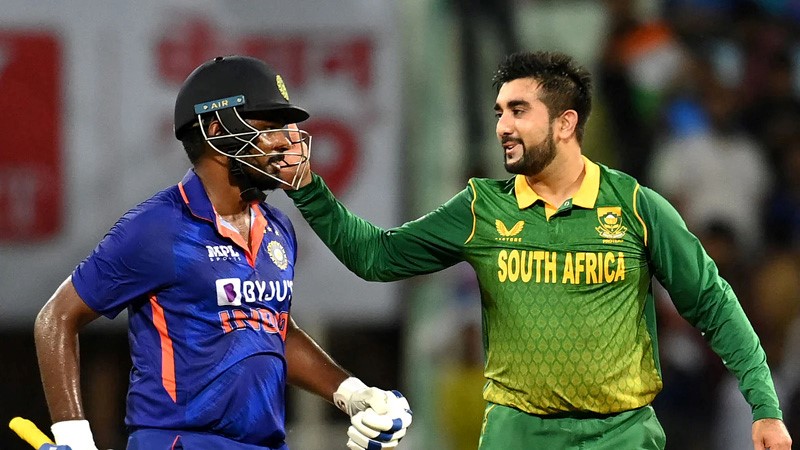