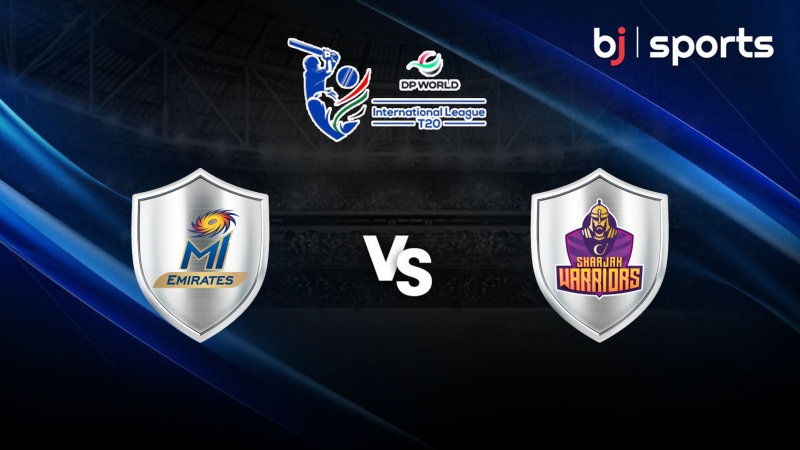 On January 14 at Sheikh Zayed Stadium in Abu Dhabi, MI Emirates and Sharjah Warriors will play in the second International League T20 match.

Reliance Industries, which also owns the most successful IPL team, the Mumbai Indians, owns MI Emirates. Kieron Pollard, a talented all-rounder for the Mumbai Indians who just announced his retirement from the IPL, will serve as the team’s captain.

An Indian corporate group, Capri Global, owns the Sharjah Warriors, and R Shridhar, a former fielding coach for India, serves as the team’s director. Moeen Ali, an all-round spinner for England, will serve as the Warriors’ captain during the ILT20 2023’s debut season.

On the day of the game, Abu Dhabi’s weather is predicted to be cool and pleasant.

In 32 of the 61 games that have been played here, the pursuing team has prevailed. The toss winner will probably choose to field first.

The Sheikh Zayed Cricket Stadium’s pitch is usually excellent for batting with some help for spinners and slower bowlers.

Najibullah Zadran of Afghanistan, Bas de Leede of the Netherlands, Samit Patel, Nicholas Pooran, Will Smeed, and captain Kieron Pollard make up the MI Emirates’ batting lineup. These players are all proficient in the T20 format. Samit Patel has played in a few of leagues and is a skilled spinner. Power hitters in this format include Kieron Pollard and Nicholas Pooran.

This Warriors team appears to have a good batting order. Along with the devastating batters Evin Lewis and Rahmanullah Gurbaz, we have the England batters Moeen Ali, Dawid Malan, and Tom Kohler-Cadmore. Chris Woakes and Mohammad Nabi are occasionally capable batsmen as well.

MI Emirates is the favorite to win this match.

Both teams’ squads appear to be formidable, but the impact of the top players will be felt. With them, MI Emirates has some experience thanks to Dwayne Bravo and Kieron Pollard. They both have a good understanding of the format. We are betting for MI Emirates to defeat Sharjah Warriors in this game.