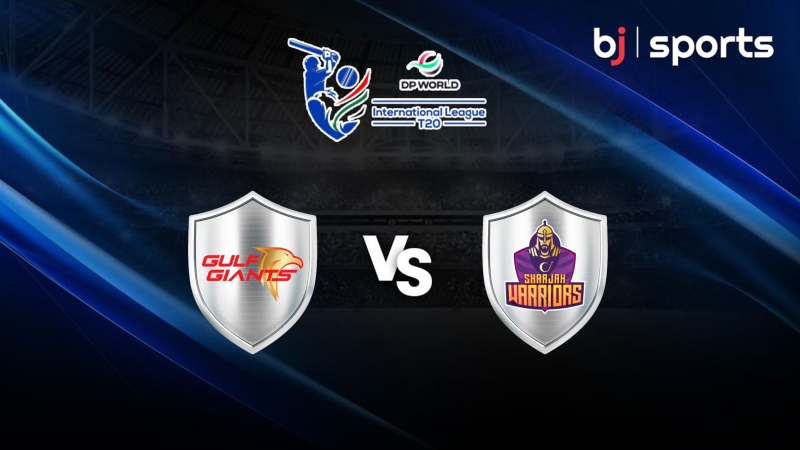 On Monday, January 23, at the Dubai International Cricket Stadium, Gulf Giants and Sharjah Warriors will face off in the fourteenth match of the International League 2023.

In the first International League T20, the Gulf Giants are having an excellent run. With 8 points and a net run rate of +2.130, they comfortably occupy the top spot after winning all four encounters. James Vince, the team’s captain, has scored the most runs for the Giants this season with 228 in 4 games at a 152.00 strike rate.

With only 2 points and a dismal net run rate of -0.745, Sharjah Warriors sit in fourth place on the table. However, they will gain confidence from their 7-wicket victory over Dubai Capitals in their previous match. The Sharjah Warriors will be glad to be back in Dubai as it will offer their poor batting unit a chance to find some form.

Around 24 degrees Celsius will be the temperature, making for comfortable playing conditions. The high 30s could be the range for the humidity.

The team batting second is well-favoured at the Dubai International Cricket Stadium. Five of the six games played there this season were victories for the chasing team. In this match, the team that wins the toss will select to bat second.

The pitch in Dubai was just fantastic. Run scoring has been rather simple. It is anticipated that bowlers would struggle. To defeat the opposition, the side batting first should aim to set a target of roughly 190–200 runs.

The Gulf Giants currently appear unstoppable. They successfully chased down an intimidating 196-run mark in their previous match with three balls and five wickets remaining. The two players that led the chase were Chris Lynn (71 off 42 balls) and Shimron Hetmyer (70 off 35 balls). The most dependable bowlers have been Chris Jordan (7 wickets in 4 matches at an economy of 8.74) and David Wiese (6 wickets in 4 matches at 6.54).

Sharjah Warriors eventually gained victory by defeating Dubai Capitals on January 21 after losing their first three games in a row. At the Dubai International Cricket Stadium, Tom Kohler-Cadmore’s spectacular unbeaten innings of 106 from 47 balls helped them chase down a total of 178 in just 14.4 overs. The Warriors’ joint-highest wicket-takers this season are Chris Woakes (5 wickets in 3 matches at an economy of 8.83) and Junaid Siddique (5 wickets in 4 matches at an economy of 8.52).

Gulf Giants is the favourite to win this match.

The Gulf Giants are a strong team with a lot of batting and bowling depth. Their batting appears even more dangerous now that Shimron Hetmyer and Chris Lynn are regaining their form. This batting unit may be capable of reaching any goal. With the exception of Tom Kohler-bizarre Cadmor’s performance the other night, the Sharjah Warriors have had trouble clicking as a batting unit. Although their bowling has been passable, they would need to go above and above to defeat the Giants.