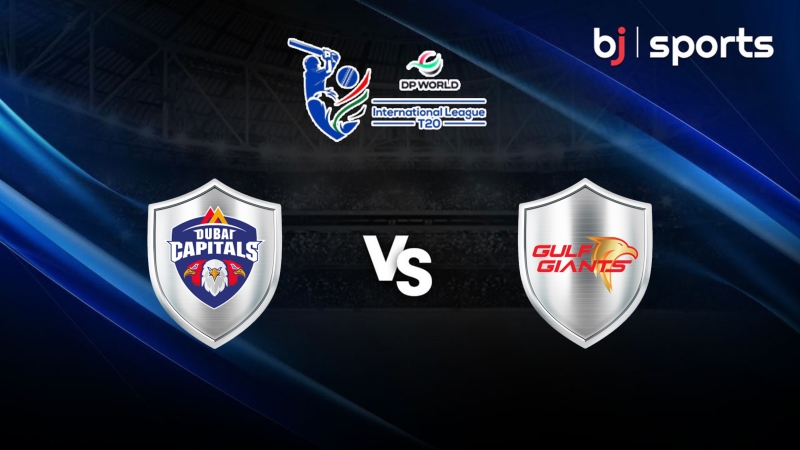 The batsmen for Dubai Capitals set a lofty goal of 187/6 in their 20 overs. The tone was established by the opening pair of Joe Root and Robin Uthappa, who combined for 43 runs. After switching up their approaches, Rovman Powell (48 runs) and Sikander Raza (26 runs) raised their team’s total in the middle overs.

Gulf Giants won the match by six wickets after chasing down 115 runs in just 14.1 overs. In their 75-run partnership, Ollie Pope (18 runs) and James Vince (65 runs off 46 balls, 4 boundaries, 4 sixes) gave each other solid assistance from the other end. After three fast wickets late in the game, Shimron Hetmyer guided his team to victory.

The match will likely be played in humid, sweltering weather in Dubai.

In all three of the games that have been played so far, team captains have chosen to bowl first, and the teams that batted first have won two of the games. But we anticipate that the trend of chasing will also persist in this match.

Dubai has a pitch that is somewhat favourable for batting, particularly for pacers. As the game goes on, the pitch may become slower.

The Dubai Capitals’ batting lineup performed as well as could have been expected in the last game, but it does not mean there aren’t any flaws. Because they no longer play nearly enough top-notch T20 cricket, guys like Uthappa and Pathan remain a source of concern for us.

We believe the Gulf Giants have a minor advantage over the Dubai Capitals in this regard because of the bowling unit’s inclusion of Richard Gleeson, Liam Dawson, Rehan Ahmed, and David Wiese. The Gulf Giants have a strong lineup at the plate. The team’s primary batters will be Shimron Hetmyer, David Wiese, James Vince, and Olli Pope.

Dubai Capitals is the favourite to win this match.

With a convincing win in each of their respective opening games, both clubs have momentum and form on their side. In their most recent game, the Dubai Capitals showed off their batting prowess, while their bowlers never tried to help the opponents in the chase. The batters for the Gulf Giants pursued the low score with a few hiccups in the final frame of the game. Dubai Capitals are predicted to prevail in this game.