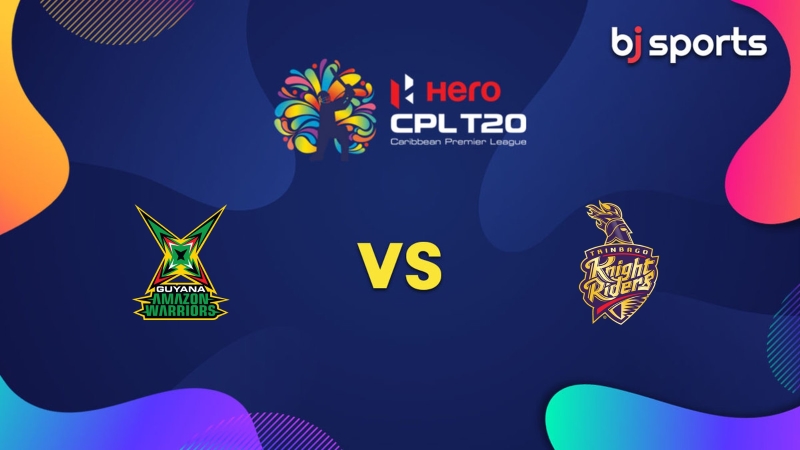 At the Providence Stadium on Saturday night, Guyana Amazon Warriors and Trinbago Knight Riders will play in game 28 of the 2022 Caribbean Premier League. On Thursday, both teams competed at this location. The Warriors defeated Saint Lucia Kings by six wickets, while the Knight Riders were defeated by St. Kitts & Nevis Patriots by seven runs.  At 19:00 local time in Guyana, the game begins.

With victories over Jamaica Tallawahs and Saint Lucia Kings, Guyana Amazon Warriors now have a great chance to advance to the playoff match. They have received a much-needed lift in the competition from their new players.

The wrong time in the tournament for the Trinbago Knight Riders to lose their form. They will be under pressure because a loss would mean elimination.

Guyana will experience a bright sky and a maximum temperature of 26 degrees Celsius.

Winning the toss and bowling first has become the norm in this field. In the past, teams that chose to bowl first have fared better in games. But this season, teams batting first have prevailed in 3 of the 4 games played at Providence Stadium in Guyana.

Teams with a par total on the board have been able to defend the score with a strong bowling assault since the surface helps spinners.

The team of Shimron Hetmyer carried over its lineup from Wednesday’s victory over the Jamaica Tallawahs to Thursday’s matchup with the Saint Lucia Kings. We anticipate seeing the same starting XI after a convincing six-wicket performance against the Kings.

Despite having six wickets in his previous two matches, Ravi Rampaul was unable to play against the Patriots on Thursday due to fitness concerns. Along with Anderson Phillip and English all-rounder Samit Patel, Khary Pierre has also dropped off the team.

Guyana Amazon Warriors are the favorites to win this match.

On Thursday, Trinbago Knight Riders moved over Guyana Amazon Warriors to the bottom of the 2022 CPL standings, and a significant improvement in form is required for the Knight Riders to win this match. We anticipate that the Warriors will continue their impressive run of results and support them to win.