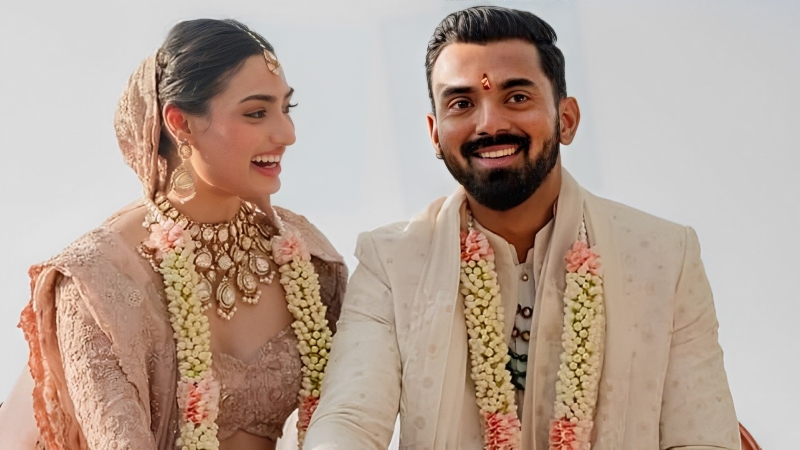 Ending all the speculations, finally, the Rahul-Athiya pair is united. A long-time love was fulfilled on Monday. Indian cricketer and Bollywood actress officially tied the knot. Rahul and Athiya completed the auspicious ceremony at Athiya’s father Bollywood actor Sunil Shetty’s Khandala home in the presence of family and close friends. Their marriage was completed in the south.

Popular Bollywood actress Athiya Shetty is now Mrs Rahul. After the wedding, the two shared wedding pictures through social media. There Athiya is seen wearing a light pink lehenga with white thread and pearl work. With a Kundan design cut Jarawa set and a small tip on the forehead. Rahul is seen wearing a white sherwani and a five-nadi necklace with stones around his neck. Garland of white flowers around the neck of both. In the picture, Rahul is seen holding the hand of the girl he loves. Sometimes this cricket star is also seen gently kissing the hands of his newly married wife.

Athiya Shetty made an emotional post after the consummation of a long-term relationship. To Rahul, she wrote, “I wrote to love in your light. Today we got married in the midst of our loved ones, in the midst of great joy and peace at home. May your blessings guide us in this new journey of ours.”

Athiya’s father Sunil Shetty, the newly-in-law, is seen distributing sweets soon after his daughter’s wedding. However, he claimed that he was not the father-in-law. Sunil told reporters, “The role of father-in-law will not be new to me. Because, not a son-in-law, I got another son.” The Indian cricket star had already taken leave from BCCI for marriage. Could not play the series against New Zealand. IPL ahead. Sunil Shetty said that the grand wedding reception will be held after the IPL.

Many of the Indian cricketers could not attend the wedding ceremony due to the series. Virat Kohli and Rohit Sharma were not directly present at teammate Rahul’s wedding ceremony as they were with the team. But  Virat Kohli, Yuvraj Singh, and Surya Kumar Yadav did not forget to congratulate the newlyweds. Note that this sweet relationship between the Bollywood family and the Cricket family is not new. One of India’s best cricketers, Virat Kohli, has previously tied the knot with popular Bollywood actress Anushka Sharma.